Getting pucks to the net was no issue for Jay Varady’s Tucson Roadrunners Friday night, who earned a 4-1 victory over the Ontario Reign.

48 shots made their way onto Reign netminder Cal Petersen, who withstood the storm through the first 20 minutes of play but in the second, Roadrunners team-leading goal scorer Lane Pederson struck on the man advantage to put Tucson ahead 1-0.  Andy Miele, from behind the net, fed the third-year pro for his 11th of the season.

Three minutes later Ontario would tie the game but making it goals in two consecutive games, Beau Bennett propelled the Roadrunners back into the lead, one they would not let up on. Forecheck from Andy Miele and Brayden Burke created the opportunity for Bennett, who was left alone wide open in the slot.

Concluding the three-goal frame for Tucson was the first professional goal for forward Kevin Hancock. A shift filled with persistence resulted in the former Owen Sound Attack star stuffing one past Petersen on his backhand to extend the lead to a pair.

An empty net goal from Jeremy Gregoire put the finishing touch on the team’s seventh win already in November, the most by any Roadrunners team through four seasons during the month.

Earning the win in net was goaltender Eric Comrie, who improved to 4-0 on his conditioning assignment from the Arizona Coyotes. He stopped 29 of 30 Ontario shots.

“Leadership.  We have a good room in there and our leaders had the group ready to go today.  Right from the drop of the puck we were ready to skate and I think it showed most of the game.”

Head Coach Jay Varady was to the point in describing why he thought his team was successful this evening.

After unloading the tank and putting up an eight-spot Wednesday night in San Jose, then having a travel day back to Tucson on Thursday, it wouldn’t have been completely unheard of for most hockey teams to struggle in a situation similar to that of which the Roadrunners were in Friday.  Perhaps this is why the team’s bench boss praised his leaders in the dressing room as much as he did because no step was lost and the team continued rolling.

Make it back-to-back games with a first pro goal for the roster and both doing so in winning fashion.

A special moment created just before puck drop by fans inside the Tucson Arena, raising a light for our Hockey Fights Cancer Evening. 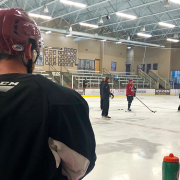 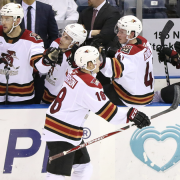