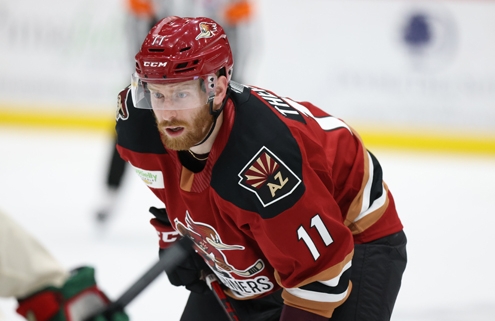 Tucson, Arizona – The Tucson Roadrunners, owned and operated by the Arizona Coyotes, announced today the signing of forward Colin Theisen to an AHL contract for the 2022-2023 season.

Theisen joined the Roadrunners on March 23 and had five goals and six assists for 11 points over the team’s final 16 games of the regular season after he completed his college career at Arizona State University.

“After an outstanding season at ASU, Colin adjusted well to American Hockey League competition with the Roadrunners,” said Roadrunners General Manager John Ferguson. “We look forward to seeing the progress he has made for the upcoming season.”

With Tucson, Theisen was the team’s third-leading scorer during his time with the team. Three of his 11 points came on the power-play and he also scored in his only shootout attempt of the season with the game-winning goal as the Roadrunners beat San Diego 3-2 in the regular season finale on April 29. Theisen’s first pro goal came in his second pro game at Henderson on March 25 as he added an assist in the contest for his first pro point. He also scored a goal in his Tucson Arena debut on April 1.

Theisen was the Sun Devils leading scorer during the 2021-2022 season with 19 goals and 23 assists for 42 points in 35 games. 42 points set a single-season scoring record for Arizona State University and he also served as Team Captain as a Graduate Student. Theisen played the first four seasons of his college career at Notre Dame.

The Monroe, Michigan native is the first Sun Devil to sign with the Coyotes organization. Arizona State teammate Josh Doan, who was drafted by the Coyotes in 2021 (second round, 37th overall), enters his sophomore season at Arizona State for the 2022-2023 season.