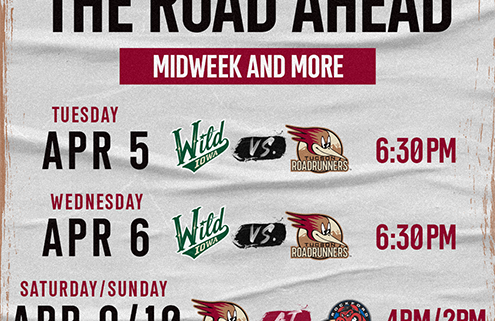 The Roadrunners will wrap up their four-game home stand with a pair of midweeks matchups against the Iowa Wild Tuesday and Wednesday at the Tucson Arena. The Roadrunners and Wild split a weekend series in Iowa back in November, with this week’s games marking the Minnesota Wild’s first trip to the Old Pueblo since October 2019. Following the series with Iowa, the Roadrunners will head on the road for a pair of rematches with the Rockford IceHogs after facing off in Tucson last Friday and Saturday.

Midweek Deals For Students And Military

Both contests with the Iowa Wild Tuesday and Wednesday will feature $5 draft beers and half-priced tickets for students and military. For more information and to purchase tickets, click HERE. Coverage for Tuesday’s series opener begins at 5 p.m. on FOX Sports 1450AM, with a special extended pregame edition of Roadrunners Happy Hour with “Voice of the Roadrunners” Adrian Denny and Brett Fera from the Arizona Daily Star.

The Jim Click Automotive Team has provided 1,000 tickets for local students and their families in Pima County Schools to attend the Roadrunners 6:30 p.m. matchups with the Iowa Wild on Tuesday, April 5 and Wednesday, April 6. Beginning both days at 5:15 p.m., families in Pima County Schools can collect the tickets at Window 2 of the Tucson Arena Box Office. “We’re very excited to provide this opportunity for the youth of Tucson to be exposed to such an incredible sport and team in the Tucson Roadrunners,” said Jim Click Jr. “The Tucson Roadrunners are a fantastic organization that’s made a huge impact on this community in such a short period of time.  Who knows, the next great hockey player could be a young person that’s seeing hockey for the first time thanks to this experience.”

Friday’s series opener with Rockford was the Roadrunners last El Lazo de Tucson game of the season, presented by the City of Tucson. The team donned their alternate identity celebrating the rich culture and heritage of Tucson, as they wore their special El Lazo uniforms for the final time this season. A variety of food trucks were featured outside the Arena and Sunnyside High School’s Mariachi Band, Mariachi Los Diablitos de Sunnyside, returned for another performance. Fans in attendance saw the Roadrunners overcome a late 3-2 deficit with Rockford to force overtime and earn a standings point.

The Tucson Roadrunners are seeking experienced and talented visual artists, artist teams, and arts organizations to create a unique mural at the Boys & Girls Club at 3155 E Grant Road. The mural installation will be on a shipping container located next to the roller hockey rink (DEK Hockey) at the Club. Total mural commission is $2,500, with an additional budget to cover supplies (up to $500).  All interested artists should submit their resume, sample of past works, and a statement of interest directly to the Tucson Roadrunners HERE no later than Tuesday, April 12.  The mural reveal is scheduled to take place in early to mid-May.  Please direct any questions to Kayla Miller at kayla.miller@tucsonroadrunners.com.

Roadrunners forward Ben McCartney has stepped into a leading role within the Tucson offense as the year has gone on. In his last five outings, the 20-year-old has posted six points (3g 3a) and a pair of fights, while scoring a goal in each of the team’s last two wins. McCartney is the active team leader for goals (13), assists (16) and power-play goals (6) and made his NHL debut with the Arizona Coyotes earlier this season on November 5.

Tucson veteran forward Terry Broadhurst has emerged as an offensive threat over the team’s last four contests. During that stretch, Broadhurst has recorded five points (2g 3a) including a pair of points (1g 1a) against his former team, the Rockford IceHogs. The 33-year-old’s best performance of the season came on Friday, March 25 when he tallied a goal and two assists for his first three-point game of the year.

Roadrunners forward Stephen Harper found the back of the net in both matchups with the Rockford IceHogs last weekend at the Tucson Arena, marking his first two American Hockey League goals. Harper unleashed a one-timer to open the scoring 1:40 into Friday’s series opener, before adding his second goal of the season midway through the first period of Saturday’s series finale. With the pair of goals, the 27-year-old enters the midweek series against Iowa on a two-game point streak.

Netminder Josef Korenar returned to Tucson for Saturday’s series finale with the Rockford IceHogs after suiting up for the Arizona Coyotes in Glendale the night before. Korenar finished the weekend with 47 combined saves between the Coyotes and Roadrunners, including a 26-for-28 performance Friday night in the NHL against the Anaheim Ducks. In a pair of relief appearances for Arizona March 28 and April 1, the 24-year-old posted a .914 save percentage across 71 minutes of action.

Goaltender Ivan Prosvetov set a new Roadrunners franchise record this season for consecutive outings by a goalie. His 30-save outing on Friday, April 1 against the Rockford IceHogs marked his 16th-straight appearance in net for Tucson. Prosvetov capped off the impressive run with a 2-0-1 record in his last three contests before being recalled by the Arizona Coyotes Saturday morning, snapping the active streak.

With netminder Ivan Prosvetov’s recall to the NHL, the Arizona Coyotes roster currently features ten players from the Roadrunners Opening Night roster: forwards Barrett Hayton, Hudson Fasching, Jan Jenik, Matias Maccelli and Mike Carcone, along with defensemen Cam Dineen, Dysin Mayo, JJ Moser, Vlad Kolyachonok, and goaltender Prosvetov. Also appearing in games with the Coyotes this season were forwards Ben McCartney and Blake Speers, defenseman Victor Soderstrom, and backstop Josef Korenar. In all, seven of the 14 total players to skate for both the Roadrunners and Coyotes made their National Hockey League Debuts this year.

Tucson’s pair of goals in the first period of last Friday’s series opener with the Rockford IceHogs marked the fastest two goals to start a game for the Roadrunners this season. Stephen Harper got the scoring started 1:40 into the contest with his first American Hockey League goal, before Colin Theisen followed it up with 5:12 gone by in the opening frame to set the new season best. Assisting on both goals was defenseman Andrew Nielsen, completing a stretch of four assists in three games for the 25-year-old.