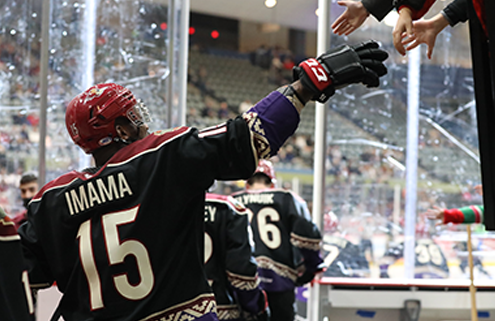 The Tucson Roadrunners have announced Bokondji Imama as the team’s IOA/American Specialty AHL Person of the Year.

The Arizona Coyotes acquired Imama this past offseason where he went on to appear in 54 games for the Roadrunners totaling four goals, five assists and 10 fights. After 207 career AHL games, he made his NHL debut on April 22 at Gila River Arena against Washington and scored his first NHL goal the following night against St. Louis to start a third period comeback. His first NHL fight took place on April 29 in the season finale as he appeared in four total games with Arizona.

As an Alternate Captain, Boko has led by example all season and brought the expected contributions and more to our locker room and organization.

After an unfortunate incident in San Jose in January, Boko wanted to make sure that something was done to spur action in a positive direction. He spearheaded the launch of a t-shirt that was sold in the arena during games and online with all proceeds going to the Hockey Diversity Alliance raising thousands of dollars and selling hundreds of shirts. The t-shirt can be purchased HERE.

Boko has also taken the lead in other Roadrunners team initiatives and provided a personal video message to the family of a Veteran who passed away before the team’s Military Appreciation Game as that family attended their first Roadrunners game since his death on November 13. Boko has also contributed to the team’s Roadrunners Fight Cancer and Hockey Is For Everyone efforts.

The Roadrunners are so proud of Boko and all he has brought to Arizona for this season both on and off the ice.