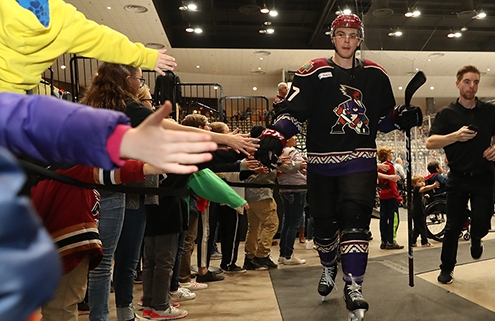 GLENDALE, ARIZONA — Arizona Coyotes President of Hockey Operations and General Manager John Chayka announced today that the Coyotes have signed defenseman Dysin Mayo to a one-year, two-way contract. As per Club policy, terms of the contract were not disclosed.

-Joined Michael Bunting, Adin Hill, Kyle Capibianco and Jalen Smereck as the only five Roadrunners who have played with the team all four seasons in Tucson so far as Tucson has won two of the last three Pacific Division Champions.

-Played in 191 of 194 regular season games the last three seasons with the Roadrunners.

-Joined Andy Miele and Michael Bunting as the only three Roadrunners to play in all 58 games in 2019-2020.

In The Community: Dusty’s Blood Drive
Scroll to top