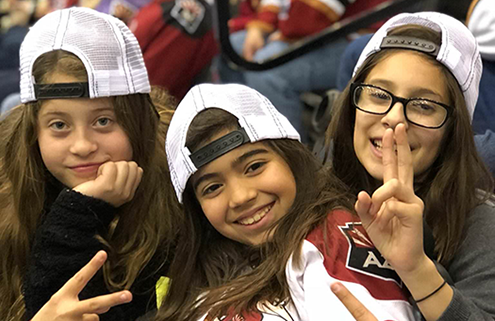 Chris, Gabriela, Christian and Telsi Olaiz can be found every game in Section 121 Row C, after of course dinner at Street Taco or maybe pizza inside the Tucson Arena. The Olaiz family, all with different interests, has found a common passion with the Tucson Roadrunners.

“Neither of us had ever watched pro hockey, we never really grew up around it,” said Gaby about herself and her husband Chris. “When it started up here in Tucson, my former boss had tickets and we took our kids to the game and they loved it.” Chris was born in Las Vegas and raised in Tucson. Gaby was born in Mexico City, moved to Nogales and has been here in Tucson for the last 16 years.

And to be fans, you have to look the part right? The Olaiz family now has a whole new part of their wardrobe. “We all got jerseys the first year and then we got them signed at the Christmas Party,” said Gaby. “The kids have started collecting different jerseys. Roadrunners ones, then the Coyotes and as the guys move around, they follow them and they’ve collected some other teams too. Texas, Nashville, Vegas are a few.” Both Christian and Telsi each have twelve jerseys!

As fans, the family knows their stuff. “She (Telsi) doesn’t miss a game, she doesn’t talk during the games, she stays focused. She knows all the player’s names, where they’re from, they’re stats. Christian knows everything too,” recounted the proud mother.

Under the tree in 2018, the family was surprised with another Roadrunners twist. A trip and game tickets to San Diego to see the Roadrunners play the Gulls in a road building. “We went to San Diego to watch the Roadrunners and we met some other Tucson fans there and we won that game too. It was a really fun trip. The arena was packed and it was all Gulls fans, it was overwhelming,” said Gaby. The trip to enemy territory was a great experience for the family, despite being heavily outnumbered, they were overcome with how kind the home fans were. And of course, the 4-2 Tucson win with a late empty-net goal from Michael Bunting and 32 saves from Adin Hill was the best part.

With the two teenagers born just three days apart on the calendar and also during hockey season, it presents the family another opportunity to have a party. “The kids have celebrated their birthdays twice at a hockey game and they’ve had all of their friends. One year, I sent out invitations for their friends and all of their parents replied back asking to come too. We had almost the entire section for the party and we did win so it was a great day,” said Gaby.

And of course, when the Roadrunners throw a party, the Olaiz family will be there,

“We really like the first event where we see the new team and get to eat lunch with them (at the Face-Off Luncheon) and the Christmas party is really fun. The kids really love talking to the players. Christian likes to skate on the ice. He started skating because of hockey, he wants to play hockey now,” said Gaby.

A few years ago at the party for Dusty’s Kid’s Club, Telsi actually beat Roadrunners Forward Lane Pederson in bowling. Gaby concluded by saying that Lane still remembers that and always tracks down Telsi to catch up at the team events.