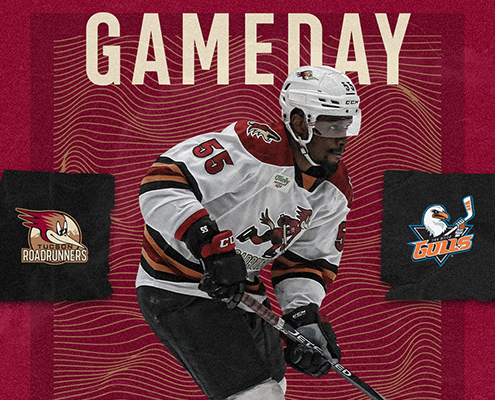 The Tucson Roadrunners wrap up their quick two-game California road trip Saturday night, with a matchup against the San Diego Gulls in Irvine. Tucson has not faced San Diego yet this season but will clash with them four times in the next seven games on the schedule.

Three Things
1) Tucson Roadrunners forward Kevin Roy scored his team-leading seventh goal Friday night versus the Ontario Reign. In his first year with the Roadrunners, Roy already has four multi-point performances, including a goal and an assist in the first period Friday night.

2) Goaltender Connor LaCouvee made his second start of the season for the Roadrunners Friday night against the Ontario Reign. LaCouvee, who spent last season with the Maine Mariners of the ECHL, made 25 saves on 29 shots at the Toyota Sports Performance Center in El Segundo, California.

3) The Tucson Roadrunners will be returning home after Saturday night’s game with San Diego, for a homestand that features four games in six days at the Tucson Convention Center. The first game will be Tuesday, March 16, at 6:30 versus the Ontario Reign, and will feature the return of fans to the TCC, as part of Roadrunners Fan Week.

What’s The Word?
Roadrunners forward Jeremy Gregoire on returning to the ice this weekend after missing a game due to injury last week:

“I’m ready to go, I’ve practiced hard this whole week and I’m happy to help the guys again on the ice. It’s a different view from up top [in the stands]. ”

Number to Know
9 – The new number of Tucson Roadrunners skaters with a multi-point performance through eleven games this season. Defenseman Doyle Somerby added his name to the list Friday night against the Ontario Reign, picking up a goal and an assist within 23 seconds of each other during the first period.

We’re Doing It Live
Roadrunners Hockey returns to the radio today at 8:00 p.m. as “Voice of the Roadrunners” Adrian Denny brings you all of the action on Fox Sports 1450 AM. All Roadrunners games are broadcast live on Tucson’s Sports Station, along with AHLtv.