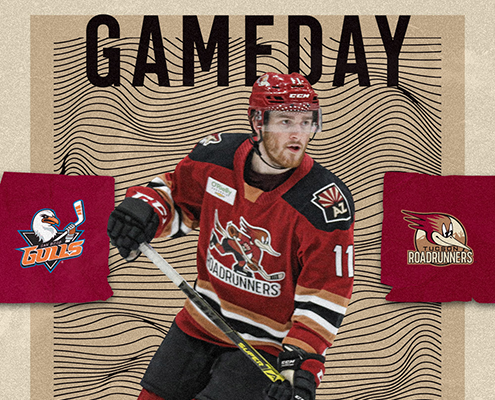 The Tucson Roadrunners host the San Diego Gulls for the second straight night Sunday at the Tucson Arena, wrapping up their series with the Gulls and Roadrunners Fan Week. Tucson is fresh off a dominant 6-2 victory over the Gulls Saturday night, and are looking to make a statement once again Sunday night, and spark a winning streak before the team heads out on the road next week.

Three Things
1) The Tucson Roadrunners are 2-0 against the San Diego Gulls this season, after two decisive victories over the Gulls on back-to-back Saturdays. Tucson has outscored San Diego 10-3 in the two games and will look to continue their success against the Gulls Sunday night. Tucson will face the Gulls again next Saturday in Irvine.

2) Connor LaCouvee served as starting goaltender for the Tucson Roadrunners Saturday night against the San Diego Gulls. LaCouvee earned a win while recording a career-high in saves with 40, which was a season-high for Roadrunners goaltending so far this season. LaCouvee has appeared in five games for the Roadrunners this season, posting a .913 save percentage and averaging only 2.63 goals allowed per game.

3) Roadrunners forward Kevin Roy scored his team-leading eighth goal of the season Saturday night against San Diego. Roy spent his first four seasons in the AHL as a member of the San Diego Gulls and has recorded a goal and two assists in two games against his former team this season. Roy has fifteen points through as many games this season, only trailing regular linemates Lane Pederson and Michael Bunting for the team lead.

What’s The Word?
Tucson Roadrunners forward Michael Bunting on Tucson’s keys to success Saturday night and what they hope to continue doing going into Sunday’s rematch with San Diego:

“I think we just have to play fast. [Saturday night] we were fast and in their face on the forecheck. When we play fast, we get turnovers and we counter and we go on two-on-ones. We just have to keep doing that and playing north and playing forward. Simple games win hockey games.”

We’re Doing It Live Roadrunners
Hockey returns to the radio today at 5:00 p.m. as “Voice of the Roadrunners” Adrian Denny brings you all of the action on Fox Sports 1450 AM. All Roadrunners games are broadcast live on Tucson’s Sports Station, along with AHLtv.