The Roadrunners have arrived in California for their Thanksgiving Eve matchup against the Bakersfield Condors, AHL affiliate of the Edmonton Oilers.

The first matchup of the season between the two teams comes at a special 6 p.m. start time in Arizona, so prepare accordingly as the Roadrunners will look to make it four in a row for the third time already this season.

1) Tucson aced their test of three games in four days last week following their loss to San Jose last Sunday.  They bounced back by walloping the Barracuda in return, traveled home and then took two from an Ontario team that entered Southern Arizona well rested.  Now, speaking of rest, that was a bit of a sprint for the team in a short amount of time and following just three days off, which included a travel day back to California, they don’t have the luxury of a full week of rest to prepare for tonight.  It’s young in the season, but the Roadrunners are 6-0 when having more than four days of rest and 8-4 when having anything under.

2) With five points in the two wins against the Reign, forward Brayden Burke is up to 18 points in 18 games this season for Tucson.  Again, it’s early, but albeit in a different form of production, it’s hard not to think of the leap Lane Pederson took from his first year to his second year when looking at Burke’s numbers this year.  The second-year Burke now has six goals and 12 assists, only trailing Pederson, last year and thus far this year’s team-leading scorer by just one point. Oh, he also shared a tie of the league lead in both power play goals (6) and game-winning goals (4), too.  Not bad.

3) With Eric Comrie having rejoined the Coyotes upon conclusion of his conditioning stint, that means it’s back to Adin Hill and Ivan Prosvetov as the tandem in Tucson’s crease. Hill, who has allowed more than three goals only twice this season, has had a nice start to his campaign but equally as impressive has been the 20-year-old Prosvetov.  Before being reassigned to Rapid City to make room for the Comrie loan, the Russian netminder posted a 3-1 record and a .944 save percentage at the AHL level.  Sometimes, ECHL assignments such as that can be tough on goaltenders especially when they’ve achieved such early season success at the higher level.  Not Ivan.  Prosvetov posted a 4-1 tab with the Rush and a .930 save percentage.  The success has been marveling and again, no matter the situation, Tucson is in good hands in net.

“Everyone’s bought in right now.  It’s still pretty early on, only 18 games in, so we’ve still got a long way to go.  We have to go get every point and every win we can right now.”

“Every point matters, like we saw last season.  Even if it’s early, we can’t take anything for granted. We’re doing well but we have to keep going.”

“Everyone is playing their role to the best of their abilities. Everyone’s done a great a job. It’s a great team effort right now. We have a nice mix of some more experienced guys, some younger guys and everyone’s contributing.  It’s a great thing to see and to be a part of.”

24.  In Saturday’s game preview we referenced that the Roadrunners have allowed the fewest first period goals in the entire league (9). Success defending early has also come with success striking late, as the team’s 24 third period goals ranks tied for first in the AHL, despite playing fewer games than both the teams sharing the lead with (Grand Rapids and Utica).

Catch tonight’s active LIVE on AHLTV or join Roadrunners play-by-play voice Adrian Denny on Fox Sports 1450 AM and iHeart Radio as he calls the game from the Roadrunners’ flagship radio station, where coverage begins at 5:45 PM. 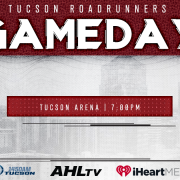 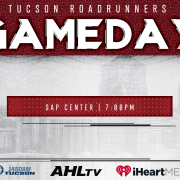 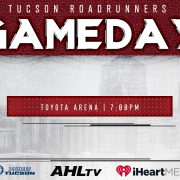