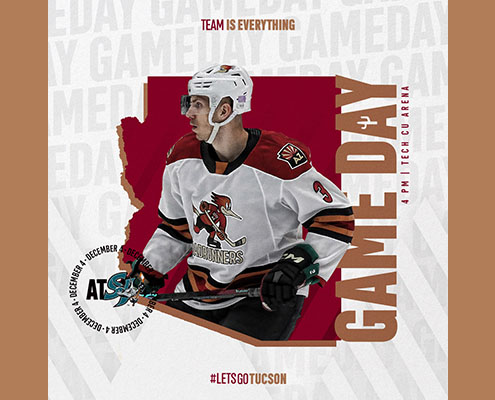 The 10-7-1-0 Tucson Roadrunners wrap up their five-game road trip and weekend set with the San Jose Barracuda Sunday afternoon at the Tech CU Arena in San Jose. The matchup will be the sixth meeting between Tucson and the AHL affiliate of the San Jose Sharks this year, with the Roadrunners currently up three wins to two in the season series. After Sunday, Tucson and San Jose won’t meet again until the final two games of the 2022-2023 campaign on April 14 and 15 at the Tucson Arena. The Barracuda took the series opener at the Tech CU Arena Saturday night by a score of 4-2 for their first series-opening win against Tucson this year. Sunday’s game also represents the Roadrunners second game in the last seven days, while San Jose will be taking their home ice for the fourth time in six days.

Three Things
1) The Roadrunners jumped out to a 1-0 lead in Saturday’s series opener against San Jose with a goal by Jan Jenik 5:49 into the first period. The goal was the 22-year-old’s third of the season and the fastest to open a matchup between Tucson and San Jose Barracuda this year. All three of Jenik’s goals have come on the road over his last four appearances away from the Tucson Arena, including one in the first outing of the Roadrunners current five-game road trip in San Diego on November 23. Jenik has four points (2g 2a) in as many efforts since the start of the road trip, and his goal on Saturday made him the sixth Roadrunner this season to reach ten total points (3g 7a). During the 2020-2021 campaign, Jenik made his AHL debut against the Barracuda on February 7, 2021, then made his NHL debut against the San Jose Sharks on May 7 of the same year. In his career, Jenik has 11 points (4g 7a) in 14 games against the Barracuda, as well as four goals in as many appearances against the San Jose Sharks in the NHL.

2) A late goal by Tucson forward J.S. Dea on Saturday made him the first Roadrunner to light the lamp ten times this season. Dea’s team-leading tenth score came with just 1:11 remaining in the third period and extended his active goal streak to four games, the longest streak by a Roadrunner this season. The 28-year-old is looking to lead his team in goals for the second-straight season after he paced the AHL’s Laval Rocket in goals last season with 26. Entering this year, Dea has scored 15 goals or more in six of his last seven seasons in the AHL, only coming up short in the 2020-2021 campaign when he still notched 15 points (6g 9a) in as many games for the Rochester Americans.

3) Tucson and San Jose have played physical hockey through five meetings this season, with Saturday’s series opener being no exception. The contest featured 19 total infractions and a combined 63 penalty minutes, the third-most in a matchup between the Roadrunners and Barracuda this season. Through five meetings this season, Tucson and San Jose have combined for 341 penalty minutes, or more than five and a half hours of time spent in the penalty box. Entering play Sunday, the Roadrunners (396) and Barracuda (433) are atop the American Hockey League for total penalty minutes, with Tucson ahead of the third-place team by 50 minutes. Their combined 341 penalty minutes in just five contests against each other would be the fourth most in the entire AHL, five minutes behind the third-place Belleville Senators. After Jan Jenik dropped the gloves with former Roadrunner Jalen Smereck on Saturday, seven of Tucson’s 15 total fights this year have come against San Jose.

“[Jon] and Ivan are two good goalies with lots of experience in this league and in the NHL. Overall, we have a good team, we just have to play simple and stick to the game plan to move up in the standings.”

Tucson defenseman Victor Soderstrom on the strength of the Roadrunners goaltenders: Jon Gillies and Ivan Prosvetov.

Number to Know
11 – The number of games this season where the Roadrunners have scored before their opponent. Tucson possesses an 8-2-1-0 record when lighting the lamp first, including a 4-3 win in their previous series finale at the Tech CU Arena on October 29. In addition, the Roadrunners are 4-1-1-0 when leading after the first period, and 7-0-1-0 when leading after the second. Tucson has lit the lamp more times in the first period this year (20) than any other frame of action despite recording their fewest shots on goal per-period in the opening 20 minutes of play (158).

We’re Doing It Live
Today’s game will be broadcast live on AHLtv, as well as on the radio at FOX Sports 1450AM and the iHeartRadio app. Coverage will begin at 3:45 p.m. with Roadrunners Warm-Up hosted by Jimmy Peebles, before “Voice of the Roadrunners” Adrian Denny has all the action from the Tech CU Arena.