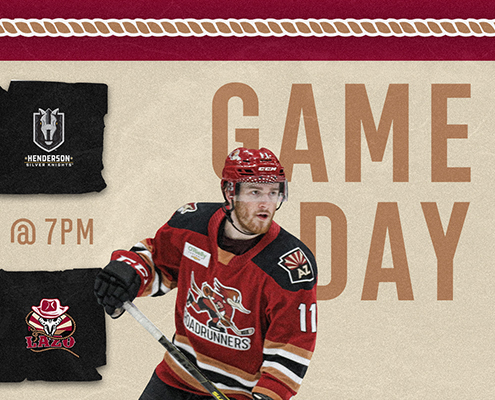 The Tucson Roadrunners continue their three-game set with the Henderson Silver Knights Friday night, with their second-ever clash with the Silver Knights. Puck drop is at 7:00 p.m. MST at Tucson Arena. The Roadrunners will be looking to build off of the positives from Wednesday night’s contest, where they scored once again on the power-play and recorded a season-high 45 shots on goal.

Three Things
1) Friday’s game is significant for the Roadrunners and the City of Tucson for a number of reasons. The team will be debuting their “El Lazo de Tucson” identity, incorporating it into their game presentation with Latino-themed music and video board presentations presented in both Spanish and English. The identity celebrates the rich Hispanic culture and heritage of Southern Arizona, along with the history of the City of Tucson and the Desert Southwest. In addition to the El Lazo festivities, the team will be welcoming nearly twice as many fans into the Tucson Arena for the game, with the new limit set at 1,150 spectators.

2) Tucson cashed in on the power-play once again Wednesday night, this time it was Barrett Hayton who buried a blast from the face-off circle for his first special teams goal of the season. The Roadrunners have now scored a power-play goal in each of their last four games, with five total goals coming on the man advantage. Eight different Roadrunners have now scored on special teams, including Nate Sucese with a shorthanded score back in February.

3) The Tucson Roadrunners franchise leader in goals, points and games played, Michael Bunting, made his first NHL appearance of the season with the Arizona Coyotes Wednesday night against the Colorado Avalanche. Bunting tallied a goal and an assist in his first NHL action since the 2018-19 season. Additionally, goaltender Ivan Prosvetov made his NHL debut in the same game, making 23 saves in relief of fellow former Roadrunner Adin Hill.

What’s The Word?
Tucson Roadrunners defenseman Kyle Capobianco on striving to score first in every contest and continuing to have the momentum throughout a game:

“The first goal is huge…the team that scores first has a good chance of winning. I think we did a good job of battling back, we just need to carry momentum and finish periods off better.”

Number to Know
45 – The number of shots on goal the Roadrunners recorded in Wednesday night’s battle with the Henderson Silver Knights. The Roadrunners spent much of the game in their offensive zone, where they sent pucks toward two-time AHL Goaltender of the Month winner Logan Thompson all night long. Nearly every active Tucson skater recorded a shot on goal. Kevin Roy and Jeremy Gregoire led the charge with five shots apiece. Look for Tucson to continue this level of pressure in the remaining pair of games against Henderson this weekend.