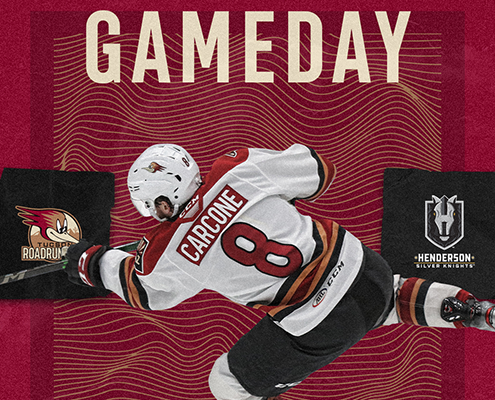 The Tucson Roadrunners travel to the state of Nevada for the first time in franchise history, to clash with the Henderson Silver Knights in a three-game set at the Orleans Arena in Las Vegas. The Roadrunners defeated the Silver Knights in their most recent meeting 4-2, coming off of a two-goal performance by Tyler Steenbergen. Henderson sits atop the AHL Pacific Division with an 18-6 record, but they have dropped three of their last four games. Their 36 points are the second-most throughout the league and their .750 point percentage is tied for third-best in the AHL.

Three Things
1) Tucson Roadrunners forward Mike Carcone made all sorts of noise last weekend against the San Diego Gulls, setting franchise records for both goals and total shots on Friday. Carcone scored six goals in the span of two nights, earning him his first career AHL Player of the Week Award. Carcone increased his goal total on the season to ten, making him one of sixteen players in the AHL to reach that number on the season, joining his linemate Kevin Roy for the team lead. Carcone is currently in his fifth AHL season, and his first season spent outside of the North Division. Carcone has been to the Calder Cup Playoffs twice in his career and reached the Eastern Conference Finals with the Toronto Marlies in 2019.

2) While Michael Carcone was putting goals on the TCC scoreboard against the Gulls, linemate Kevin Roy assisted on each one. Roy enters the series against Henderson with a three-game point streak and is currently fifth in the AHL in total points. If he maintains this pace, he’ll become the second player in Tucson Roadrunners franchise history to finish in the top 5 in the AHL for points, and first since Chris Mueller recorded the third-most points in the 2016-17 inaugural season. After a multiple-point performance in each of the two games against San Diego, Roy leads the team with seven, three of which have come against his former team in the San Diego Gulls.

3) Entering their second three-game series with each other on the season, the Roadrunners and Silver Knights have had different fortunes as of late. The Roadrunners travel to Nevada having won two of their last three games, scoring 14 goals during that stretch. Meanwhile, the Silver Knights have lost three of their last four games and haven’t won in regulation in nearly two weeks. When these two teams take the ice Thursday, it will likely be a matchup of the reigning AHL Player of the Week Michael Carcone going against the two-time AHL Goaltender of the Month Logan Thompson. Tucson can even up the season series by taking two out of the three games and can finish with the better head-to-head record on the season with a sweep.

What’s The Word?
Tucson Roadrunners forward Michael Carcone on playing on a forward line with Kevin Roy and Frederik Gauthier, and how they have been successful the past two games:

“[Roy] is such an elite player at this level. He can shoot, he can score, he can make plays in tight and he’s almost 2 steps ahead of the player in front of him on the ice. With [Gauthier] I think he’s about 80% on draws right now, which is unbelievable and makes a big difference when you’re starting with the puck. He’s a big body, he’s responsible in the defensive zone and he’s not afraid to chip in offensively. I think we’re a perfect fit right now together and we’re clicking so we just have to keep rolling with it.”

Number to Know
2 – The number of Tucson Roadrunners players to be recognized as the AHL Player of the Week this season. The Roadrunners are the only team in the league with multiple Player of the Week winners, while five of the ten winners overall have come from the AHL Pacific Division. Coincidentally, both winners from Tucson were named Michael, as Michael Bunting earned the award in only the second week of the season, followed by Michael Carcone as the most recent winner. Bunting was the first Roadrunner to win the award since Conor Garland was named Player of the Week in October of 2018. Bunting and Garland have since become NHL linemates on the Arizona Coyotes roster this season, after playing together in Tucson from 2016 to 2019.