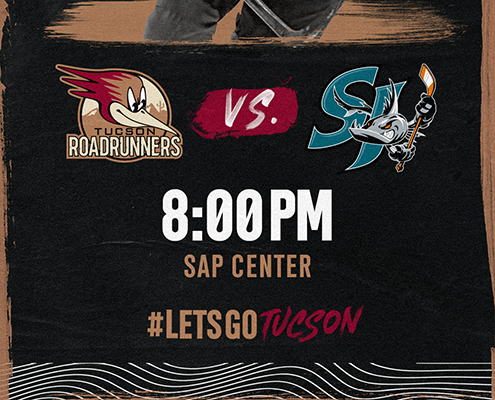 The Tucson Roadrunners open their two-week, six-game road trip with the first matchup of the season against the San Jose Barracuda Wednesday night at the SAP Center in San Jose. Tucson and San Jose last faced off in the 2021 AHL Pacific Division Tournament, when Ivan Prosvetov and Josef Korenar went head-to-head in Irvine, California. Wednesday’s game also marks the Roadrunners first trip to the SAP Center since February 2020.

Three Things
1) The story of Tucson’s four-game home stand to open 2022 was the performance of their special-teams units. The Roadrunners scored five goals while on the man advantage and were perfect on their first 15 instances on the penalty-kill. Forward Jan Jenik had two of the five power-play strikes, including the eventual game-winner in the third period of a 2-1 win over the first-place Stockton Heat on January 4 to begin the calendar year. The Roadrunners will look to maintain this level of production out of their special teams on the road, where they possess a division-fewest seven power-play goals allowed.

2) The Roadrunners will take on the San Jose Barracuda for the first regular-season matchups since the opening weekend of the 2020-2021 season, where Tucson grabbed a pair of wins as the designated away team at the Tucson Arena. Ivan Prosvetov started in goal for Tucson in both contests, allowing only three goals on 73 total shots on net, and forwards Mike Carcone and Jan Jenik each recorded their first multiple-point performances as members of the Roadrunners.

3) Three Roadrunners enter Wednesday night on an active point streak of three games: forwards Matias Maccelli, Boko Imama, and Michael Carcone. Maccelli returned to the Tucson lineup for the weekend series with Colorado and tallied a point in each of the contests, including his team-leading fourth power-play goal in Sunday’s outing. The 21-year-old leads the Roadrunners in scoring with a point-per-game average in 23 appearances. Meanwhile, the 25-year-old Imama leads the team in both fights and penalty minutes per-game (min. 6 games played) but has flashed the offensive side of his game with a goal in each of his last two efforts.

“We haven’t been paying much attention to them at this point, obviously we’ve had other opponents. Our focus is turned to them right now in terms of getting ready and moving forward.”

Number to Know
5 – The number of fights over the Roadrunners four-game home stand between the Stockton Heat and Colorado Eagles last week at the Tucson Arena. Five different Tucson skaters dropped the gloves, starting with forwards Ben McCartney and Hudson Elynuik on back-to-back nights against the Heat January 4 and 5. Cedric Lacroix and Chaz Reddekopp followed them up with bouts in the series opener against Colorado, and Boko Imama saved the best for last with his fifth fight of the season in the series finale on Sunday.

We’re Doing It Live
Tonight’s game will be broadcast on AHLtv, as well as on the radio on Fox Sports 1450AM, or on the iHeartRadio app. Coverage begins at 7:45 p.m. MST with Roadrunners Warm-Up, as Jimmy Peebles gets you ready for the game before “Voice of the Roadrunners” Adrian Denny has the call at 8:00 p.m. live from the SAP Center.