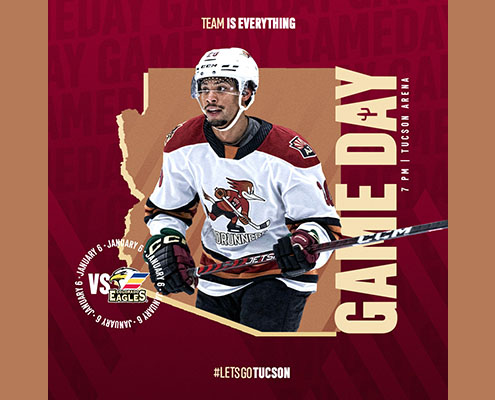 The 14-12-4-0 Roadrunners are in Tucson to open 2023 with a four-game home stand beginning tonight against the Colorado Eagles. The series opener against Colorado is the first game for Tucson since December 31, while the Eagles are coming off of a 4-2 loss to the Coachella Valley Firebirds on Wednesday. Friday’s contest also represents the start of a busy January for Tucson, with 10 home games and 14 total matchups throughout the month. The Roadrunners will also be hosting their first ever Yoga On Ice Session as part of Health and Wellness Night, with more information available HERE.

Three Things
1) Friday marks the first meeting on the season between Tucson and the AHL affiliate of the Colorado Avalanche, as the Roadrunners and Eagles are slated to meet just four times this year. The Roadrunners earned at least a standings point in both series openers against Colorado during the 2021-2022 campaign, including a 4-1 victory in their first matchup of the season on December 3, 2021. Tucson has a 4-2-1-0 record in series openers on their home ice this season, with a standings point in each of the last four. The Eagles enter the series in the desert with a 7-7-1-0 mark on the road this season, with an overall record of 18-11-2-0.

2) Tucson possesses a power-play percentage of 25.6% with 20 goals while on their home ice, both of which are ranked first in the AHL’s Western Conference. The Roadrunners will look to continue their power-play success at home from before the break, with a goal on the man-advantage in each of their last five games at the Tucson Arena. Their 11 power-play strikes during that stretch are as many or more power-play goals than 12 AHL teams have scored on their home ice all season. In addition, the Roadrunners are tied for second in the AHL’s Pacific Division for total goals scored on the man-advantage with 30, and are one of just two teams in the Western Conference to average a power-play goal per-game or better (Calgary).

3) Back with the Roadrunners after being recalled before last weekend’s action in Texas is forward Laurent Dauphin. Dauphin was recalled by the Arizona Coyotes on December 31 and appeared in a pair of games on the road against the Tampa Bay Lightning and Florida Panthers over the last week. The 27-year-old rejoins the Tucson roster tied for second on the team in total points with 12 goals and 15 assists. Still the Roadrunners and the AHL’s leading scorer Mike Carcone, scored his second goal of the season Thursday for the Coyotes in Philadelphia. Tuesday, Carcone was named the AHL Player of the Month for December 2022, with a league-leading 10 goals and 20 total points in just 10 outings during the month. Carcone is the first Roadrunner to ever win the award and still holds a four-point lead on the league scoring lead with 16 goals and 26 assists for 42 points in 28 games with Tucson despite having been called up over ten days ago.

“We haven’t had too much time to get on the ice for a full week before a set of games. It’s been good to sharpen some things up and just be with the guys for a full week to dial it in.”

Roadrunners forward Ryan McGregor on the week of practice at the Tucson Arena leading into Friday’s series opener with the Colorado Eagles.

Number to Know
3 – The number of American Hockey League defensemen to reach 20 assists on the season before the start of 2023, including Roadrunners blue-liner Cam Dineen. 15 of Dineen’s 20 total assists have come on the power-play, which is tied for the league lead. The 24-year-old trails only the AHL’s leading scorer Mike Carcone for the Roadrunners team lead in assists and power-play points. With Dineen and Carcone, Tucson is one of just three teams in the American Hockey League to feature both a forward and a defenseman with at least 20 assists (Ontario, Syracuse).