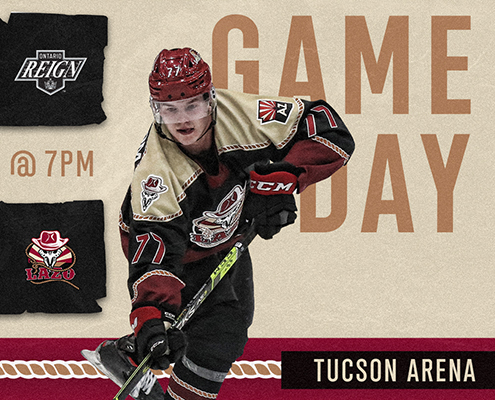 The Tucson Roadrunners return to the Tucson Arena Friday night, after two weeks of being on the road in California and Texas. The Roadrunners will play their final two games of the regular season Friday and Sunday, as they host the Ontario Reign. The series has the potential to impact playoff seeding for the play-in tournament beginning on Tuesday.

Three Things
1) The Ontario Reign arrive in Southern Arizona having won five of their last six games, with four of those wins taking place on the road. The Reign had a five-game winning streak snapped on Sunday, when they were defeated by the Colorado Eagles by a score of 7-5. The Reign have played the second-most games in the AHL this season (38), behind only the San Diego Gulls (41). The Reign and Roadrunners will both have something to play for this weekend, because if the Roadrunners can win both games with at least one win in regulation, they will overtake Ontario in the standings, impacting the playoff matchups of both teams. Regardless of what happens this weekend, the Roadrunners will be taking on either the Colorado Eagles or San Jose Barracuda on Tuesday, following their weekend series with the Reign.

2) Looking to bolster their roster heading into the final weekend of the season and their defense of the AHL Pacific Division title, the Roadrunners have brought back some high-impact players from the Arizona Coyotes roster. Fresh off their first career NHL goals, forward Jan Jenik and defenseman Victor Soderstrom are back in the Roadrunners lineup. Jenik made his NHL debut with the Coyotes a week ago, scoring a goal in each of his first two games. Joining them is defenseman Kyle Capobianco, who has appeared in 18 games with the Roadrunners this season, with 12 points.

3) To kick off Fan Appreciation Weekend, Friday night marks the third and final “El Lazo de Tucson” game of the season. The game will have the usual El Lazo game presentation, with the “Los Diablitos de Sunnyside High School” mariachi band and the ballet folklorico returning once again. Roadrunners mascot Dusty will take on his alter-ego of “El Polvo” one last time. After the game, the team will be hosting a live El Lazo jersey auction, with all proceeds from the auction benefitting Boys and Girls Clubs of Tucson.

What’s The Word?
Tucson Roadrunners forward Jan Jenik on making his NHL debut with the Arizona Coyotes last week and scoring in each of his first two games with the club:

“It was amazing, I was really thankful to get a chance like that. It was a huge opportunity, and I tried to do my best and really enjoyed it too.”

Number to Know
10 – The number of players to make an appearance with both the Tucson Roadrunners and their NHL affiliate, the Arizona Coyotes during the 2021 season. Of the eight skaters, Michael Bunting led the way with 13 points in 21 games with the big club. Adin Hill started 17 games for the Coyotes, picking up nine wins and recording two shutouts. Victor Soderstrom, Lane Pederson, Ivan Prosvetov and Jan Jenik all made their NHL debuts with the Coyotes this season.

We’re Doing It Live
Roadrunners Hockey returns to the radio today with Roadrunners Warm-Up at 6:45 p.m. MST as “Voice of the Roadrunners” Adrian Denny brings you all of the action on Fox Sports 1450 AM. All Roadrunners games are broadcast live on Tucson’s Sports Station, along with AHLtv