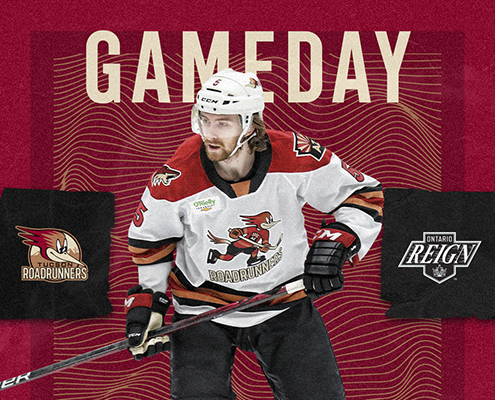 The Roadrunners continue their first road trip in 2021 for the two-game series finale with the Ontario Reign. The Roadrunners defeated the Reign 5-4 Friday night, with four different skaters scoring. Michael Bunting scored twice on the power-play for his second and third goals of the season.

Three Things
1) The Roadrunners won Friday night against the Reign, largely in part due to the team’s special teams play. The Roadrunners scored a power-play goal in each of the first two periods, along with a shorthanded goal. The Roadrunners were outscored five-on-five  3 goals to 2 but were 2-for-3 on the power-play and 1-for-4 on the penalty-kill.

2) Roadrunners returnees Michael Bunting, Lane Pederson and Cam Dineen each recorded their second goals of the season Friday night, with Bunting even picking up his third later in the contest. Each of these skaters have spent multiple years with Tucson (Dineen 3rd, Pederson 4th, Bunting 5th) and were key members of last year’s division-winning club.

3) Michael Bunting is tied for the league lead with three power-play goals through three games. The Tucson power-play leads the Pacific Division at three-for-11, that’s a twenty-seven percent success rate, with all three goals scored by #27.

“Our defense had so many blocks and made so many plays, it makes it easier for me to play, seeing effort like that, you all want to play for each other and seeing that is huge.”

Roadrunners goaltender Ivan Prosvetov on the skaters in front of him during Friday night’s 5-4 win over Ontario.

Number to Know
6 – The number of points Roadrunners forward Michael Bunting has through the first three games of the season. Bunting had two goals and an assist in Friday night’s 5-4 win over Ontario, which adds to his franchise leads in goals and points.

We’re Doing It Live
Roadrunners Hockey returns to the radio at 2 p.m. as “Voice of the Roadrunners” Adrian Denny brings you all of the action on Fox Sports 1450 AM. Roadrunners Warm-Up starts at 1:45 p.m. and the game can be seen on AHL TV as well.