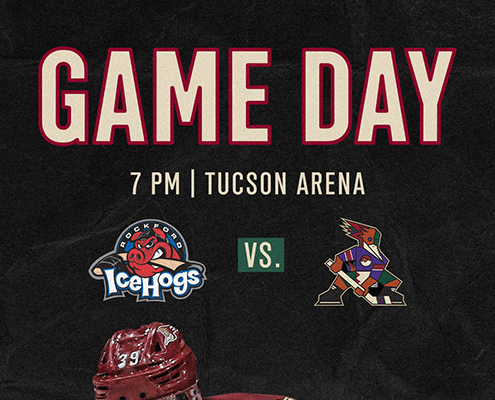 The Tucson Roadrunners will wrap up their weekend series with the Rockford IceHogs Saturday night, after picking up a standings point in the series opener. Tucson will look to extend their unbeaten streak to four games in the rematch with the Chicago Blackhawks AHL affiliate. Saturday’s game is Autism Acceptance Night at the Tucson Arena, presented by Pizza Hut. The first 1,000 fans will receive a sensory pop pad, and Roadrunners Mascot Dusty will leave his cowbell and drum at home in favor of a quieter game atmosphere.

2) Friday’s series opener with Rockford marked the fourth consecutive one-goal game against Central Division opponents for the Roadrunners. Tucson has overcome a late deficit to force overtime in back-to-back out-of-division contests after Travis Barron netted a late power-play goal on Saturday, March 12 in Texas to tie the game at 2-2. Friday night against Rockford saw Terry Broadhurst bury the equalizer with 4:17 still to play in regulation. Broadhurst has three points (2g 1a) in Tucson’s last four out-of-division matchups, as the 33-year-old spent five of the first six seasons of his AHL career in the Central Division.

3) Making his 16th consecutive appearance in net for the Roadrunners Friday night was goaltender Ivan Prosvetov, extending the franchise record. Prosvetov is fifth in the American Hockey League for both minutes and saves, as the 23-year-old recorded his second-straight performance of at least 30 saves Friday night against the IceHogs. Prosvetov has averaged 30 saves over his last three outings with a 2-0-1 record and .918 save percentage across those contests.

“That always feels good, that’s where I started. I know a lot of the guys over there and enjoyed my time a lot there.”

Roadrunners forward Terry Broadhurst on scoring a goal against his former team Friday night. The 33-year-old appeared in 152 across four seasons with the Rockford IceHogs, including his first three years in the AHL.

Number to Know
13 – The number of consecutive successful penalty-kills by the Roadrunners dating back to Friday, March 25 against Henderson. The Roadrunners matched a season-best seven-for-seven on the penalty-kill last Saturday against the Silver Knights, before going a perfect five-for-five in the series opener with Rockford Friday night.

We’re Doing It Live
Today’s game will be broadcast on AHLtv, as well as on the radio on Fox Sports 1450AM or on the iHeartRadio app. Coverage begins at 6:45 p.m. MST with Roadrunners Warm-Up, as Jimmy Peebles gets you ready for the game before “Voice of the Roadrunners” Adrian Denny has the call at 7:00 p.m. live from the Tucson Arena.