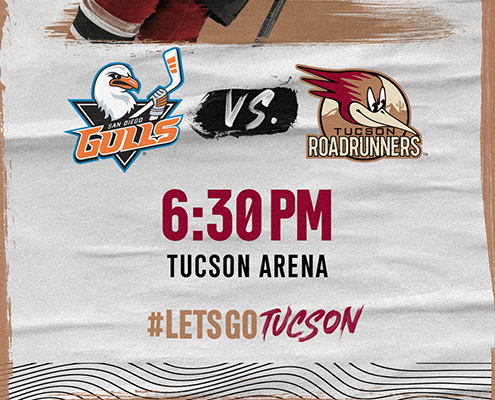 The Roadrunners will wrap up the 2021-2022 season with their final two games at the Tucson Arena against their I-8 Border Rivals, the San Diego Gulls. The series marks San Diego’s first trip to the Old Pueblo since October 29 and 30, 2021. The Roadrunners and Gulls will be battling for possession of the I-8 Border Trophy, with Tucson looking to clinch the trophy for the fifth-straight season with a pair of regulation wins.

Three Things
1) The Roadrunners are hosting the San Diego Gulls at the Tucson Arena for the first time since the opening home stand of the season. The Roadrunners and Gulls split the pair of games October 29 and 30, with Tucson taking the series finale. In that game, Roadrunners Captain Hudson Fasching recorded the first of two Tucson hat tricks against the Anaheim Ducks AHL affiliate on the season with an overall five-point night (3g 2a). The 6-4 victory marked the first of four games this year where the Roadrunners scored at least six goals.

2) While Tucson’s historic power-play unit has received attention over the final month of the season, the Roadrunners have been limiting the usage of their penalty-kill unit at the other end. Over their last two games, the Roadrunners have held their opponents scoreless on just three trips to the penalty-kill, tied for the fewest over a two-game stretch this season. In their last two-game set on home ice, the Roadrunners tallied a combined nine goals with three scored while on the man-advantage in just eight chances. Tucson’s power-play currently ranks sixth in the American Hockey League at 21 percent, the best in franchise history.

3) Thursday and Friday are the Roadrunners final two games of the 2021-2022 season, as Tucson will be closing out the campaign on their home ice hoping to finish how they started. The Roadrunners won six of their first nine games at the Tucson Arena, including a 6-4 win over the San Diego Gulls on October 30. Over that span, Tucson finished six outings with at least four goals and four contests with at least five goals. Three different Roadrunners recorded hat tricks in back-to-back-to-back home series to start the year: Ben McCartney against Texas, Hudson Fasching against San Diego, and Matias Maccelli against Ontario. In addition, the Roadrunners are 8-1-1-0 at home this season with at least four days of rest, as they’ll enter Thursday’s matchup looking for their ninth such win.

Crotty has rejoined the Roadrunners

“We’re looking to get a couple wins. At the end of the day, we all want to win and give it our all. We can’t take it for granted, we just have to go out there and work our hardest.”

Roadrunners forward Ben McCartney on what the team expects from the final two games of the season.

Number to Know
21 – The number of shots allowed by Tucson in last Saturday’s matchup with the Gulls in San Diego. The number represents the fewest shots allowed by the Roadrunners in six games against the Gulls this season and is tied for fifth-fewest overall. Their five shots allowed in the first period at the Pechanga Arena is also tied for the fifth-fewest in an opening frame on the season. In addition, Tucson netminder Rasmus Korhonen took a shutout into the final 4:56 of regulation with an overall performance of 18 saves.

We’re Doing It Live
Tonight’s game will be broadcast on AHLtv, as well as on the radio on Fox Sports 1450AM or the iHeartRadio app. Coverage begins at 6:15 p.m. MST with Roadrunners Warm-Up, as Jimmy Peebles gets you ready for the game before “Voice of the Roadrunners” Adrian Denny has the call at 6:30 p.m. live from the Old Pueblo.