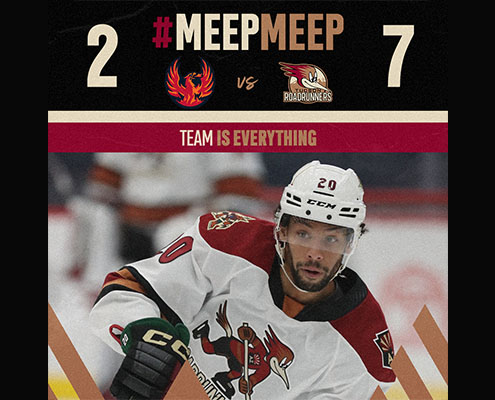 Tucson, Arizona – The Tucson Roadrunners opened a two-game midweek set with the Coachella Valley Firebirds Tuesday night at the Tucson Arena. After falling behind 2-0 early in the contest, the Roadrunners rallied for seven unanswered goals and a 7-2 win over the AHL affiliate of the Seattle Kraken. The victory was highlighted by a Mike Carcone hat trick, as well as a franchise record of five power-play goals by the Roadrunners. Ivan Prosvetov earned the win as the starting backstop for Tucson, as he stopped 15 of only 17 shots faced. The Roadrunners and Firebirds will wrap up the series Wednesday night at 6:30 p.m., before Tucson embarks on a quick three-game road trip that includes two contests in Coachella Valley.

After Teddy Bears were tossed on the ice in Tucson’s last game on Saturday, forward Mike Carcone made hats fly onto the Tucson Arena ice with his fourth hat trick as a Roadrunner. Carcone finished with a four-point night (3g 1a), as he extended his active point streak to a season-high seven games. The performance put him just one point behind the American Hockey League lead for total scoring at 31 points on the year (11g 20a).

FIVE SETS A FRANCHISE MARK – The Roadrunners recorded five power-play goals in Tuesday’s 7-2 win over the Coachella Valley Firebirds to set a new franchise record for most goals while on the man-advantage in a single contest. Forward Nathan Smith started the special-teams scoring in the opening frame with Tucson’s first goal of the game. Mike Carcone tallied two of the next three power-play strikes for the Roadrunners with one in the middle period and another in the third. Ben McCartney in the second and Laurent Dauphin in the third rounded out the prolific power-play as the Roadrunners finished five-for-nine overall on the man-advantage. The previous team record of four power-play goals in a game was set on November 18, 2016 against the Manitoba Moose.

Tuesday’s series opener between the Tucson Roadrunners and Coachella Valley Firebirds featured four fights in the third period. The fight card began 7:28 into the frame, as Vlad Kolyachonok dropped the gloves with Coachella Valley’s Cameron Hughes for his second bout of the season. Travis Barron followed it up 30 seconds later with his team-leading fifth fight of the season against Tye Kartye. Curtis Douglas exchanged blows for the first time since joining the Roadrunners less than a minute and a half later, as he went against Eddie Wittchow. Finally, defenseman Devante Stephens recorded his first fight of the season as he took on former Arizona Coyote John Hayden with 6:39 remaining in the contest.

“Obviously, it feels good. They don’t come too often, so any time you get an opportunity to cap off a hat trick, it’s a nice feeling.”

Roadrunners Forward Mike Carcone on recording a hat trick in Tuesday’s series opener with the Coachella Valley Firebirds. Carcone finished the night with three goals and an assist for his tenth multi-point outing of the season. The performance was Carcone’s fourth hat trick as a Roadrunner, which he had previously achieved on April 9, 2021 (four goals), February 5, 2022, and February 26, 2022.

The Firebirds got the scoring started early in Tuesday’s matchup with a goal 1:17 into the opening period to take a 1-0 lead. Coachella Valley extended their lead to 2-0 with another first-period score just under seven minutes into the series opener. Down by a pair early, the Roadrunners answered back in a big way with two quick goals in the span of 1:46 to even the score at 2-2. Nathan Smith got it going with his fifth score of the season, which came on an extended man-advantage caused by a high-sticking double minor on the Firebirds. Hudson Elynuik followed it up with a turnover and unassisted equalizer goal to give the Roadrunners a fresh slate after allowing the first two goals of the contest. The final eight shots of the opening 20 minutes were registered by Tucson, as they carried the momentum of those two quick scores into the second period of play. After erasing an early deficit with two quick goals in the opening period, the Roadrunners built their first lead of the game with a pair of power-play goals exactly one minute apart in the middle frame. Mike Carcone rifled in the first goal on a five-on-three advantage for his ninth of the season and Tucson’s first lead of the night at 3-2. Ben McCartney extended the newfound lead with a five-on-four second-chance goal for his fourth time lighting the lamp this year. Through the second period, the Roadrunners had held the Firebirds without a goal since the opening 6:48 of the game and had scored four unanswered goals during that span for a 4-2 advantage entering the final 20 minutes of play. Tucson’s offense continued to work in the third period, with all three goals in the frame scored by the Roadrunners to make it seven unanswered goals. Each of the first two goals in the final frame were scored by Mike Carcone to complete the hat trick, with one representing his second of the night while on the man-advantage. Laurent Dauphin capped off Tuesday’s scoring 2:16 later with his seventh tally of the season and Tucson’s fifth power-play goal of the contest. The five power-play goals by the Roadrunners set a new franchise record for the most in a single game, as Dauphin’s score came shortly after a fight between Travis Barron and Coachella Valley’s Tye Kartye. The bout was the second of four total fights between the Roadrunners and Firebirds in the third period, as Vlad Kolyachonok, Barron, Curtis Douglas, and Devante Stephens each dropped the gloves in a span of less than six minutes during the frame. The final 10:57 of the contest was without another goal as Tucson came away with a dominant 7-2 victory on their home ice.