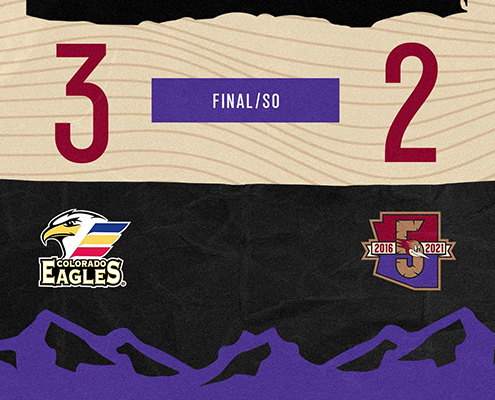 Tucson, Arizona – The Tucson Roadrunners hosted the Colorado Eagles Saturday night for a battle of the birds at the Tucson Arena. Tucson came back from a one-goal deficit to force overtime but fell in a shootout to the Eagles by a score of 3-2. The Roadrunners were perfect on the penalty-kill for a fourth-straight game, dating back to December 18. Josef Korenar made the start in net for Tucson, his first since November 13. The 23-year-old recorded 37 saves in the effort, his most as a Roadrunner.

The first action of Saturday’s contest was not a goal, but a fight between Colorado’s Keaton Middleton and forward Cedric Lacroix in his Roadrunners debut. Before a goal could be scored, there was another bout, this time between Tucson’s Chaz Reddekop and Colorado’s Andreas Englund. The best chances for either team in the opening frame came in the final 1:30 for the Roadrunners, when they went on the first power-play of the night. The team had several prime scoring chances but Colorado netminder Justus Annunen turned everything aside, and the man advantage carried over into the second period. The final 30 seconds of the Roadrunners power-play trickled off the clock, and the teams were back to even strength in the first minute of the middle frame. Colorado grabbed the first goal of the night shortly after getting back to five-on-five, taking a 1-0 lead off the stick of forward Shane Bowers just under the two-minute mark of the period. The Eagles went on their first power-play of the night just under six and a half minutes into the second, but the Roadrunners shut them down to remain perfect on the penalty-kill over their last four contests. Tucson nearly tied up the contest around the halfway point, but a disallowed goal due to the play being blown dead kept Colorado in the lead. The score held at 1-0 as the teams entered the final 20 minutes of regulation. The Roadrunners were still trailing by a goal in the early goings of the third period, but that all changed when forward Jan Jenik drew a penalty to earn Tucson their second trip to the power-play of the night. Jenik wasn’t finished, as he used the man advantage to even up the score with his third power-play strike of the season. Less than a minute and a half later, Boko Imama gave the Roadrunners a 2-1 advantage with his third score of the 2021-2022 campaign. The goal gave Tucson the lead –and the momentum– for the first time all night. With just 4:40 remaining in regulation, the Eagles tied it back up, and the contest went to overtime with the score deadlocked at two. After a scoreless five minutes of three-on-three overtime hockey, a shootout was needed to decide the outcome of Saturday’s matchup.

The Roadrunners will be back at it with the Colorado Eagles Sunday afternoon to close out the four-game home stand to begin 2022. Face-off is slated for 4 p.m. MST, with coverage beginning at 3:45 on Fox Sports 1450AM with Roadrunners Warm-Up hosted by Jimmy Peebles. Then, “Voice of the Roadrunners” Adrian Denny will have all the action live from the Tucson Arena.

“The third period was pretty much like a playoff game, that’s how we felt out there. Every battle was important, it was definitely a tight one with a lot of grit. I think we did a good job sticking together as a team and continuing to push.”

JENIK KEEPS IT GOING – Tucson Roadrunners forward Jan Jenik had his third power-play strike of the season and second in the last three games against the Colorado Eagles Saturday night at the Tucson Arena. Jenik now has nine points in as many contests and is tied with three other Roadrunners for the team lead in power-play goals.

Watch Tucson Roadrunners forward Boko Imama net the Roadrunners second goal of the night on Saturday against the Colorado Eagles. The score marked Imama’s third of the season, and eventually led to Tucson earning a point against the Eagles with a shootout defeat.

Tucson Roadrunners forward Cedric Lacroix dukes it out with Colorado’s Keaton Middleton in the first period of Saturday night’s clash at the Tucson Arena. Lacroix made his Roadrunners debut in the contest, after previously appearing in three games this season with the Chicago Wolves.