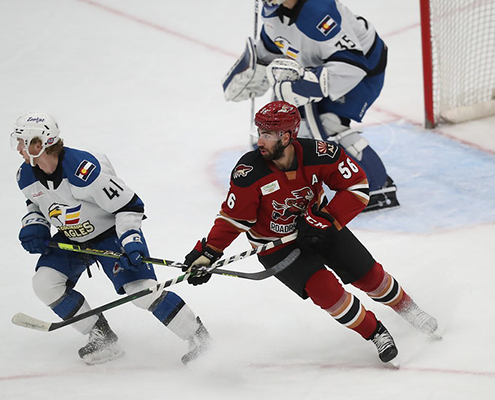 Tucson, Arizona – The Tucson Roadrunners concluded their final series of the season with the Colorado Eagles Sunday afternoon at the Tucson Arena, in a game that was broadcast live on The CW Tucson. The Roadrunners brought it for a full sixty minutes of hockey, but couldn’t get any breaks to go their way, and wound up falling to the Eagles by a score of 4-1.

Like the previous two games in the series, the scoring got started early in the first period. This time it was Colorado getting on the board first, lighting the lamp on their first power-play of the night to go up 1-0 less than three minutes after puck drop. After the early goal, the score stood at 1-0 for the next 36:44 of action. Colorado extended their lead in the final minute of the second period when rookie Alex Newhook scored his third goal of the season, making the score 2-0 in favor of Colorado. Tucson entered the third period looking to mount a comeback, and they got halfway there only 36 seconds into the period, when Ryan McGregor found the back of the net for his fourth goal of the season. The Roadrunners nearly tied the game up a few minutes later, as a shot from Barrett Hayton bounced off the right post. The bounces continued to go Colorado’s way, when they stole the puck in the Tucson zone and fired it past Roadrunners goaltender Chris Nell, pushing their lead back to two goals eight minutes into the third period. An empty-net goal with less than a minute left in the third period sealed the game for the Eagles, with the final score ending up as a 4-1 Colorado victory.

The Roadrunners head out on the road for two-straight weekends, first taking on the San Diego Gulls for a pair of games in Irvine, California. The first of two games in the weekend series is on Friday, April 30 at 7:00 p.m. MST. You can listen to the game in Tucson on FOX Sports 1450 AM and on the iHeart Radio app or watch the game on AHL TV.

“It’s been about 26 years that I’ve been working in professional hockey. I’ve been working pro hockey longer than some of these guys have been alive. It’s a gameday so I haven’t had a chance to take a peek, but my phone started blowing up. I appreciate all the well wishes, that’s for sure.”

DON’T OVERLOOK IT
ROOKIES RACK UP THE GOALS – The Tucson Roadrunners had a different rookie skater score in each of their three games with the Colorado Eagles this weekend, which each goal being the team’s first of the game. Victor Soderstrom lit the lamp in the first period of Thursday’s matchup with his second goal of the season. On Friday, Nate Sucese struck first with his sixth score of the year, leading all rookies. Finally, in a Sunday matinee, Ryan McGregor got Tucson on the board with his fourth tally of his rookie campaign, assisted by Sucese.

Watch Tucson Roadrunners rookie forward Ryan McGregor get the Roadrunners on the board with this goal only 36 seconds into the third period. The goal was McGregor’s fourth of the season, and third in games that were televised live on The CW Tucson in Southern Arizona.

Tucson Roadrunners Head Equipment Manager Eric Bechtol worked his 1800th career hockey game Sunday afternoon, when the Roadrunners hosted the Colorado Eagles. Bechtol, a Kalamazoo, Michigan native, joined the Roadrunners in July of 2016 after working for the Coyotes’ ECHL affiliate Rapid City Rush. He has been with the Roadrunners for all five of their years in Southern Arizona.

Tucson Roadrunners Road Ahead: Week of April 26, 2021
Scroll to top