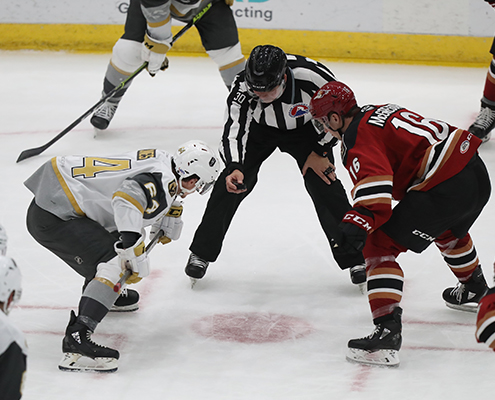 TUCSON FALLS TO HENDERSON 3-1, MANAGE 45 SHOTS ON GOAL AND A POWER-PLAY SCORE

Tucson, Arizona – The Tucson Roadrunners returned home Wednesday night to play the Henderson Silver Knights for the first time in franchise history. Tucson’s previous eight games had come against either the San Diego Gulls or Ontario Reign, so the team was eager to take on a new opponent for a change. The Silver Knights rode into town atop the AHL Pacific Division, and both teams were looking to start off the all-time head-to-head record with a win. Tucson dominated shots on goal, but Henderson goaltender Logan Thompson remained steadfast in net, stopping 44 of 45 shots to give the Silver Knights the win and a 1-0 all-time record against Tucson.

Both teams were looking to score quickly, but Henderson took the first lead of the night with a goal by Jimmy Schuldt only 1:05 into the first period. Tucson answered back with a Barrett Hayton blast to tie the game nearly four minutes later on the power-play. It was Hayton’s second score of the year, and first while on the man advantage. After seeing two goals in the first five minutes, the remaining fifteen were without a score, as both teams traded penalties, but neither could capitalize on another power-play. Henderson carried fifteen seconds of rollover power-play time into the second period but couldn’t do anything with it. It wouldn’t be until there was 3:41 remaining in the period for a goal, but Carl Dahlstrom found the back of the net for his first goal of the season, followed by Cody Glass scoring his first of the season less than three minutes later. The pair of goals put Henderson up 3-1 heading into the final frame of action. The Roadrunners went on four power-plays throughout the third period, and their eight total power-plays set a season high. Tucson’s best chance came on over a minute of being on a five-on-three advantage, but Jan Jenik couldn’t slip the puck past Logan Thompson on a breakaway. The Silver Knights fended off the rest of Tucson’s advances to keep the Roadrunners scoreless in the third period of action and hold onto a 3-1 lead for the win. Tucson will have two more chances at their first-ever win against the Silver Knights on Friday and Saturday.

The Roadrunners will unveil their “El Lazo de Tucson” identity Friday night in their second game of the week against Henderson at 7:00 p.m. MST. The team will be incorporating El Lazo de Tucson into their game presentation with PA announcements made in Spanish, Latino themed music selections and multi-language video board presentations. It will also be the first game with an increased capacity of 1,150 fans inside Tucson Arena. You can listen to the game in Tucson on FOX Sports 1450 AM and on the iHeart Radio app or watch the game on AHL TV.

“We had some great looks and funneled some pucks, we hit the post a couple times in tight. We had some good opportunities, but we didn’t handle our business. We didn’t get a goal on the five-on-three and we need to take advantage of it next time and convert.”

Tucson Roadrunners Head Coach Steve Potvin after the game on his takeaways from Wednesday night’s game and how the team can build off of it moving forward.

DON’T OVERLOOK IT
PLENTY OF POWER-PLAYS – The Tucson Roadrunners went on the man advantage eight times in Wednesday night’s matchup with the Henderson Silver Knights, setting a season high. The Roadrunners were able to cash in on one of the power-plays when Barrett Hayton lasered the puck past Henderson netminder Logan Thompson in the first period.

Watch Tucson Roadrunners forward Barrett Hayton bury the puck in the back of the net from the face-off circle to tie the contest at one in the first period. The goal was Hayton’s second of the season and first when on the man advantage.

The Tucson Roadrunners will be welcoming nearly double the fans into Tucson Arena for the month of April, beginning with Friday and Saturday night’s matchups with the Henderson Silver Knights. Saturday’s game will also be broadcast live on The CW Tucson, where Alex Kinkopf of ArizonaCoyotes.com will join “Voice of the Roadrunners” Adrian Denny as a color commentator.