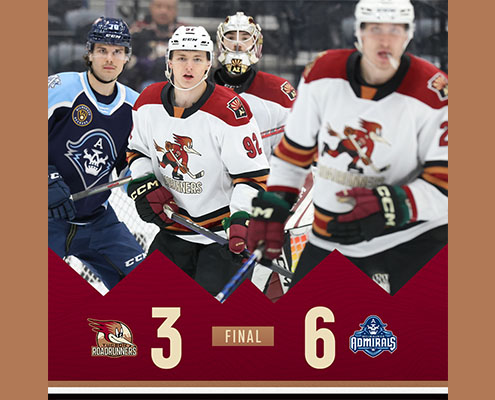 Tucson, Arizona – The Roadrunners hosted the Milwaukee Admirals at the Tucson Arena Wednesday night, and took a one-goal deficit into the final 1:03 of the contest before falling by a score of 6-3 after a pair of empty-net goals by the Admirals. Tucson Forwards Adam Cracknell (2g 1a) and Mike Carcone (3a) led the way in scoring with three points apiece, while netminder David Tendeck stopped 32 shots in his season debut for the Roadrunners. The series finale with the AHL affiliate of the Nashville Predators also marked the end of a four-game home stand at the Tucson Arena, as the Roadrunners will head out on the road for three games in five nights against three different teams, beginning on Saturday, January 14, against the Bakersfield Condors.

Roadrunners forward Hudson Elynuik netted Tucson their first goal of the night on Wednesday with 2:25 remaining in the first period. The goal was Elynuik’s third time lighting the lamp this year, as the 25-year-old is one point shy of tying his season-high for points in a season with 13, which he set in 2019-2020 with the Toronto Marlies.

THE CARCONE-CRACKNELL COMBO – Tucson Roadrunners forwards Mike Carcone (3a) and Adam Cracknell (2g 1a) each recorded three-point performances in Wednesday’s series finale against the Milwaukee Admirals. The game marked Carcone’s second-straight three-point outing since returning to the Roadrunners from the Arizona Coyotes, as the 26-year-old extended his AHL lead in points to 49 (18g 30a) and took sole possession for second place in the American Hockey League for total assists. Cracknell’s three-point performance followed up a two-point effort in the series opener on Tuesday, as the Roadrunners Captain moved into fourth place on the team for scoring with 13 goals, 11 assists and 24 total points in his first year in Tucson.

The Tucson Arena’s own Eric Brindza suited up as the Emergency Backup Goaltender for the Milwaukee Admirals Wednesday night, as AHL All-Star backstop Yaroslav Askarov was recalled by the Nashville Predators prior to the series finale between Tucson and Milwaukee. Brindza serves as the Supervisor to the Ice Maintenance Team at the Tucson Arena, and drives the Zamboni during Roadrunners home games when he’s not in full goaltender gear.

“It was a lot of pressure on [David], that was a tough team he played against that knows how to score. He made some great saves, especially that last one on a breakaway. It gave us an opportunity to go six-on-five… We had heard some great things about him [from Atlanta] and wanted to give him an opportunity to play.”

Roadrunners Head Coach Steve Potvin on goaltender David Tendeck making his season debut for Tucson Wednesday night against the Milwaukee Admirals. The 23-year-old was recalled by the Roadrunners from the ECHL’s Atlanta Gladiators and made 32 saves in his first AHL action since March 26, 2022.

After Tuesday’s series opener featured a combined six goals in the first period of play, Wednesday’s contest was scoreless for the first 11:36 of action. Milwaukee broke the 0-0 tie with a quick pair of goals less than two minutes apart for a 2-0 lead. The Roadrunners responded with 2:25 remaining in the frame, as Hudson Elynuik put Tucson on the board with his third goal of the season, assisted by linemates Adam Cracknell and Mike Carcone. The secondary assist extended Carcone’s active scoring streak to seven games, tied for a Roadrunners season high that he originally set from November 23 to December 13. The newly-named AHL All-Star also continued to extend his league lead in total scoring with his 46th point of the season (18g 28a) in 29 outings. Tucson entered the middle frame still trailing 2-1, but the second-period action began quickly with a fight between Curtis Douglas and Milwaukee’s Navrin Mutter. The bout came with just 24 seconds off the clock in the second period, as Douglas dropped the gloves for the second time in as many nights and third time since joining the Roadrunners in late November. The Admirals regained their two-goal lead with just under six minutes gone by in the period with the first power-play goal of the night, scored 29 seconds into their man-advantage to make it a 3-1 game. Milwaukee capped off the middle frame by scoring another even-strength goal with 1:58 remaining in the period for a 4-1 lead after 40 minutes of play. Tucson went to work quickly in the third period, cutting the deficit to two with Captain Adam Cracknell’s second goal in as many nights. Cracknell lit the lamp with just 46 seconds gone by in the final frame, as Will Reilly and Mike Carcone picked up assists. Carcone’s 29th assist gave him sole possession for the most assists by a forward in the AHL and tied the 26-year-old for second in the American Hockey League overall. The Cracknell-Carcone connection continued, as Cracknell netted his second goal of the opening 6:53 of the period to bring Tucson to within a goal of the Admirals at 4-3. Carcone assisted on his third-straight Roadrunners goal to become just the second player in the AHL to reach 30 assists on the year, while defenseman Vlad Kolyachonok got in on the offense with the primary assist. Still trailing by a goal, Tucson pulled netminder David Tendeck coming out of a timeout for a six-on-five attack with 2:16 left to play in regulation. The Admirals sent the puck down the entire length of the ice for a precise empty-net goal with 1:03 remaining in the contest, and added another score on the empty net with 15 seconds remaining to secure a 6-3 win in the series finale from the Tucson Arena.

1-On-1 With Adam Cracknell
Scroll to top