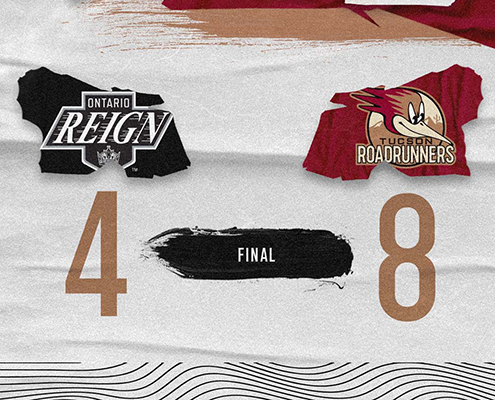 Tucson, Arizona – The Tucson Roadrunners needed to play a full team game to take down the first-place Ontario Reign, and that’s exactly what they did Friday night, defeating the Reign by a score of 8-4, handing them their first regulation loss of the season. Rookie Matias Maccelli earned his first career AHL goal and hat trick in the same night, and goaltender Ivan Prosvetov kept the Reign off the scoreboard for the final 22:28 of regulation.

The Roadrunners came out with a lot of energy to open Friday night’s contest, quickly getting some good looks on Ontario goaltender Matthew Villalta. Tucson recorded the first 6 shots on goal, and part of that was the number of shots their own guys blocked on defense, keeping the pucks away from goaltender Ivan Prosvetov. Tucson jumped out to a 1-0 lead off the stick of Cameron Hebig, with a nice feed from Terry Broadhurst, making his first appearance in front of a Roadrunners crowd. Ontario got one right back less than a minute later, however, evening the score at one. The Reign took their first lead of the night later in the period, coming fresh off a power-play with extended time in the Roadrunners zone. Tucson wasn’t just going to roll over, though, scoring less than two minutes later to tie the game back up at 2. Jan Jenik had the equalizer for his third goal of the season. That goal came with 3:17 left in the first period, and the score would stay tied at two as the teams headed into the first intermission. The Ontario Reign had control of the early part of the second period, getting a flurry of shots on goal thanks to a tripping penalty on the Roadrunners. Goaltender Ivan Prosvetov had his usual phenomenal saves to keep this game tied at two for the time being. The Reign eventually got through, retaking the lead with the score 3-2. 38 seconds later, Matias Maccelli had a beautiful breakaway score for his first career AHL goal. The goal couldn’t have come at a better time, as it tied the game back up at three. The Roadrunners weren’t interested in playing more catch-up, as Mike Carcone buried the puck on another breakaway to give the Roadrunners a 4-3 lead. That goal came less than 30 seconds after Maccelli’s, but the Roadrunners weren’t done yet. Forward Boko Imama got his first goal of the season against his former team to extend Tucson’s lead to 5-3, the first two-goal lead of the contest. Things between to heat up after the Boko Imama goal, and it culminated with a bout between Tyson Empey and Jacob Doty, and a game misconduct for Hudson Elynuik. Tucson was faced with a five-minute penalty-kill, but warded it off with ease, backed by more great saves by Prosvetov. Ontario got one back in the final two and half minutes to cut the lead, but the Roadrunners still led by one heading into the final frame. The Roadrunners began the third period on the power-play, after Sean Durzi was called for slashing in the final second of the previous period. Ontario surrendered a goal for Matias Macellli on the power-play, giving him his second goal of the night. Ontario faced with a 5-on-3 disadvantage later in the period, and with two seconds left in the five-on-three advantage, JJ Moser cashed in for his second goal of the season, extending the Roadrunners lead to 7-4. This game was all but written as we neared the end of regulation, but Matias Maccelli wasn’t finished. The rookie forward got his third goal to complete the hat trick, once again on the power-play, giving the Roadrunners their third hat trick in three weekends at the TCC. The goal made the score 8-4, and that wound up as the final tonight in Tucson.

The Roadrunners will look to win back-to-back games against the Ontario Reign Saturday night at 7:00 p.m. MST. Coverage begins at 6:45 on Fox Sports 1450AM with Roadrunners Warm-Up hosted by Jimmy Peebles. Then, “Voice of the Roadrunners” Adrian Denny will have all the action live from the Tucson Arena, as the team celebrates Military Appreciation Night.

“Tonight I got lucky a couple of times, there were some good bounces and luckily I scored on my chances.”

A ROOKIE TIES A RECORD – First-year forward Matias Maccelli had a night to remember Friday at the Tucson Arena, putting up five points, including his first career AHL goal and hat trick. The 21-year-old tied a Roadrunners franchise record for points in a game with five, becoming the second player this season to match the feat, as Hudson Fasching did so with his own hat trick and pair of assists the last time the Roadrunners were at the Tucson Arena.