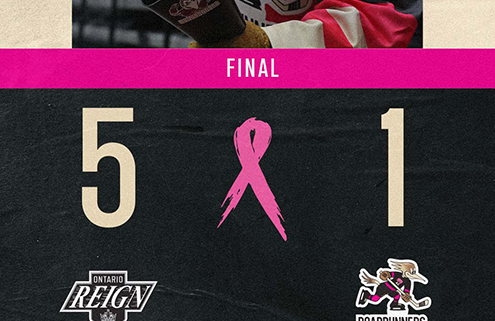 Tucson, Arizona – The Tucson Roadrunners concluded their four-game home stand at the Tucson Arena Sunday afternoon, with the second of two matchups with the Ontario Reign. The Reign came back from an early 1-0 deficit to secure a 5-1 victory and split the weekend series. The goal for Tucson was scored by Matias Maccelli, his 14th of the season and first on the power-play since January 9. Ivan Prosvetov made his fifth-straight start for the Roadrunners on home ice and stopped 19 shots on goal. To close out Roadrunners Fight Cancer Weekend, nearly $25,000 was raised in a postgame jersey auction with all proceeds going to Banner Health University of Arizona Cancer Center.

The Roadrunners jumped out to a 1-0 lead in the first period for the third-straight contest at the Tucson Arena, with a goal scored by Matias Maccelli on the power-play. The goal marked Maccelli’s third time lighting the lamp over the four-game home stand and seventh total point during that stretch. Goaltender Ivan Prosvetov posted a perfect opening frame with all four shots turned aside less than 24 hours removed from a first period Saturday night that saw Provestov tie a season-high with 16 saves. After a series opener with five goals in the first period alone, Maccelli’s power-play strike was the only goal of the opening frame Sunday afternoon. Ontario took little time to tie up the contest at 1-1 in the first 45 seconds of the middle period. Martin Frk unloaded a shot from the point for his second score of the weekend. The Reign took their first lead of the contest less than two minutes later from a shorthanded score by Austin Wagner with 15 seconds remaining on the Tucson power-play. Ontario extended their lead to 3-1 with 5:10 left to play in the middle period, then 4-1 1:42 later. Both goals were scored by Jaret Anderson-Dolan, and the 4-1 lead for Ontario remained as the teams entered the third period. The Reign added on to their lead early in the third period with their fifth-straight goal in the first 1:14 of the frame. Shortly after the score, Tucson’s Tyson Empey dropped the gloves with Ontario’s Jacob Doty. The fight marked Empey’s fourth fight since the start of 2022 and seventh on the season, and Doty’s second fight of the weekend after a bout with Cedric Lacroix in the series opener Saturday night. The remainder of the third period featured 31 penalty minutes but no scoring, as the Reign came away with the 5-1 victory to even the weekend series at one win apiece.

Tucson will head out on the road for five games across 11 days, beginning on Wednesday with the final matchup between the Roadrunners and Reign on the season. The game is set to face-off from the Toyota Arena at 8:00 p.m. MST, with coverage beginning at 7:45 p.m. MST on Fox Sports 1450AM with Roadrunners Warm-Up hosted by Jimmy Peebles. Then, “Voice of the Roadrunners” Adrian Denny will have all the action live from the Toyota Arena in Ontario, California.

“Whenever you play for a cause, it’s awesome and I love it. I think I can say for the whole locker room that everyone loves it. I had a friend who passed because of cancer, so it’s always nice to help out in this fight.”

Roadrunners forward Jan Jenik on the importance of Roadrunners Fight Cancer Weekend to him and the rest of the team. A postgame jersey auction on Sunday raised nearly $25,000, with all proceeds going to Banner Health University of Arizona Cancer Center.

FINISHING FEBRUARY – Sunday’s matchup between the Tucson Roadrunners and Ontario Reign marked the final game for Tucson in the month of February. Tucson scored ten power-play goals in as many contests during the month, and Mike Carcone led the team with 11 total goals. Carcone notched a multiple-point performance in five of the ten outings, second only to Matias Maccelli with six. Maccelli leads the AHL in points for the month of February with 19 points (4g 15a).

Watch Tucson Roadrunners forward Matias Maccelli open the scoring in Sunday’s contest with the Ontario Reign. The goal marked Maccelli’s 14th strike on the season, and fifth while on the man-advantage. The 21-year-old flashed his goal-scoring ability over the four-game home stand, netting three goals and seven total points.

Tucson Roadrunners forward Jan Jenik battles for the puck with Ontario’s Rasmus Kupari in Sunday’s series finale at the Tucson Arena. Jenik finished the four-game home stand with six points (4g 2a), including a pair of two-goal performances on back-to-back Saturday nights.

Matias Maccelli Gets Call From Coyotes
Scroll to top