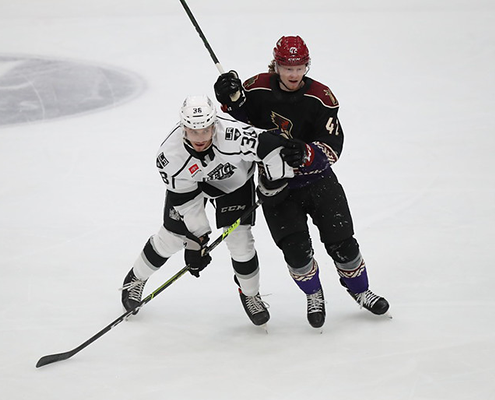 TUCSON ROADRUNNERS WRAP UP REGULAR SEASON WITH ONTARIO REIGN, WILL TRAVEL TO IRVINE TO FACE SAN JOSE IN PLAYOFFS

Tucson, Arizona – The Tucson Roadrunners concluded the 2021 AHL Regular Season Sunday afternoon, in a game that was televised live on The CW Tucson in Southern Arizona. Tucson fell to the Reign by a score of 9-4, and will now travel to Irvine, California to take on the San Jose Barracuda in the 2021 AHL Pacific Division Playoffs.

The first period was a high-scoring affair between the Roadrunners and Reign. Ontario quickly jumped out to a 1-0 lead in the first period, sneaking the puck by a screened Ivan Prosvetov only 29 seconds after puck drop. Tucson had a chance to tie it up on the power-play but just came up short. Ontario extended their lead later on in the opening frame, when Adam Johnson netted his sixth goal of the season. Tucson wouldn’t let the game get away from them, as Tyler Steenbergen picked up his tenth goal of the season to bring the Roadrunners within one goal of the Reign midway through the first period. Tucson evened the score seven minutes later, when Cam Dineen lit the lamp for the first time since returning from injury. Only a minute later, the Roadrunners took their first lead of the afternoon when Jan Jenik scored his fourth goal in his last three games with Tucson, extending his point streak to four games. Ontario evened up the score as time wound down in the first period, to send the teams to the locker room tied at three. The first period between the Roadrunners and Reign on Sunday had the most combined goals in a period since Tucson took on the San Diego Gulls on April 9. Ontario came out of the gate in the second period strong, drawing a power-play and retaking the lead at 4-3 shortly after their advantage expired. Markus Phillips extended Ontario’s newfound lead a few minutes later with his third goal of the season. The Reign kept going, as they extended their lead once more in the second period off of Bokondji Imama’s second goal of the frame, making the score 6-3 heading into the final period at the Tucson Arena this season. Ontario put their first power-play of the third period to good use, scoring their seventh goal of the night 6:04 into the final frame. Ontario added two more in the span of a minute, making the score 9-3 in their favor. Tucson got back on the board with six minutes left to play, thanks to a goal by Barrett Hayton, his sixth of the season. That goal would prove to be the last goal scored in the Tucson Arena for the 2021 season, as the final score ended up being 9-4.

The Roadrunners travel to Irvine, California for the 2021 AHL Pacific Divison Playoffs. They’ll play the San Jose Barracuda in a single-elimination showdown on Tuesday at 1 p.m. MST. You can listen to the game in Tucson on FOX Sports 1450 AM and on the iHeart Radio app or watch the game on AHL TV.

“This is a playoff mentality. You can’t get too high, you can’t get too low. Obviously, we wanted different results today, but we have to deal with it just like we would a playoff game. [Ontario] got the two points tonight, but we start fresh on Tuesday.”

Tucson Roadrunners Head Coach Steve Potvin after the game described the team’s mindset heading into a playoff matchup with the San Jose Barracuda.

DON’T OVERLOOK IT
STEENBERGEN SCORES HIS TENTH – Tucson Roadrunners forward Tyler Steenbergen scored his tenth goal of the season in the first period of Sunday’s game against the Ontario Reign, becoming the third Roadrunners player this season to put up a double-digit goal total.

Watch Tucson Roadrunners defenseman Cam Dineen score his third goal of the season in the first period of Sunday afternoon’s matchup with the Ontario Reign. The goal marked Dineen’s first since returning to the lineup from injury and extends his active point streak to three games heading into the playoffs.

Tucson Roadrunners Jan Jenik warms up prior to Sunday afternoon’s matchup with the Ontario Reign. Jenik scored near the end of the first period to give Tucson a 3-2 lead, netting his sixth goal of the season. Jenik now has six goals in his last five professional hockey games, split between the Tucson Roadrunners and the Arizona Coyotes of the NHL. Jenik also extended his current AHL point streak to four games with the score.

Tucson Roadrunners Playoff Road Ahead: Week of May 17, 2021
Scroll to top