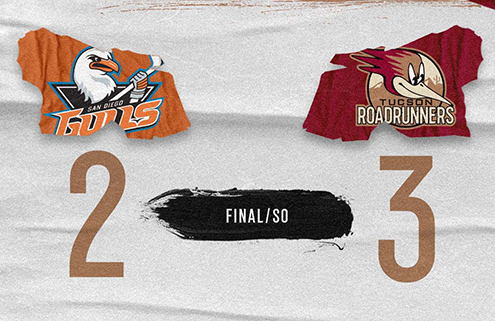 Tucson, Arizona – The Tucson Roadrunners concluded the 2021-2022 regular season Friday night against their I-8 Border Rivals, the San Diego Gulls. In the season finale at the Tucson Arena, the Roadrunners held on for a 3-2 shootout victory. Terry Broadhurst and Hudson Fasching scored second-period goals to take a 2-0 lead, before Colin Theisen and Broadhurst netted a pair of goals in the shootout to come away with the win. Goaltender Ivan Prosvetov stopped 18 of 20 shots faced and was a perfect two-for-two in the shootout in front of a crowd of 5,410, the second largest of the season at the Tucson Arena.

Watch Tucson Roadrunners forward Terry Broadhurst secure a 3-2 shootout victory for Tucson in Friday’s season finale with his second shootout goal of the season. Broadhurst opened the scoring for either team in the second period with his 11th tally of the season. In his first season with the Roadrunners, the 33-year-old recorded 24 points (11g 13a) in 49 games played.

LIMITING THE LOAD – The Roadrunners held the Gulls to an average of 19.7 shots on goal over their final three meetings of the season, while outshooting San Diego 70 to 38 over the final two matchups at the Tucson Arena. In addition, the Roadrunners dominated five-on-five scoring over the final home series of the season, scoring seven even-strength goals to San Diego’s three.

Roadrunners Captain Hudson Fasching battles in front of the San Diego net in Friday’s 3-2 shootout victory to close out the season. The 26-year-old scored his 14th goal of the season and sixth of the year against the Gulls to extend Tucson’s lead to 2-0 late in the second period.

“It’s a testament to the character of this group. It’s something that we consistently talked about, building a culture here that’s going to lead to the Coyotes and through the organization. That’s something we want to build here.”

Roadrunners Captain Hudson Fasching on Tucson’s strong effort to end the 2021-2022 campaign with back-to-back wins over the San Diego Gulls.

Friday’s first period produced the second scoreless opening frame in the last three meetings between the Roadrunners and Gulls, after Saturday, April 23 on the road in San Diego. Tucson outshot the Gulls 9-5 through the first 20 minutes of play, matching last Saturday’s mark for fewest shots allowed in a first period against San Diego on the season. The entire opening frame was played while five-on-five, with Tucson continuing to show discipline late in the season. The Roadrunners opened the scoring with 6:27 gone by in the middle period, as Terry Broadhurst buried his 11th goal of the season and second goal of the series. With assists on the score, defenseman Cole Hults notched his 10th assist of the year and forward Ben McCartney tallied his 35th point of his first full Tucson campaign. Tucson extended their lead to 2-0 with a goal by Captain Hudson Fasching in the final 1:26 of the middle frame, his 14th time lighting the lamp this season and sixth of the year against the Gulls. Leading by a pair of goals entering the final 20 minutes of the season, the Roadrunners kept the third period scoreless for the opening 9:11 of the frame before the Gulls got on the board at 2-1. The goal came on San Diego’s first power-play of the night, as Tucson avoided going on the penalty-kill for the first 47:49 of the contest. With their advantage cut to just one goal, the Roadrunners continued to hold on until the Gulls evened the score at 2-2 with just six seconds left in regulation to force overtime. In the extra three-on-three period, Tucson fended off San Diego’s second power-play of the nigh to force a shootout still deadlocked at three. Both teams came up empty-handed in the first round, before Colin Theisen gave Tucson a 1-0 advantage in the second round. Ivan Prosvetov stopped each of the first two attempts faced to give Terry Broadhurst a chance to walk it off for the Roadrunners in round three. That’s exactly what he did as he netted his second shootout goal of the season to send Tucson into the offseason with a 3-2 victory.