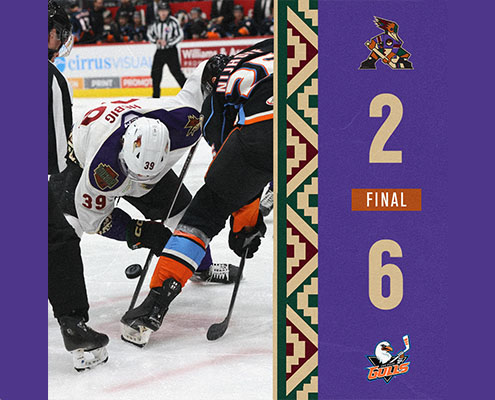 Tucson, Arizona – The Roadrunners fell to the San Diego Gulls for the first time in four meetings this season Friday night in their final home game of 2022 by a score of 6-2. Tucson’s late six-on-five attack worked for most of the final seven minutes of regulation and allowed just one empty-net goal with 23 seconds remaining, as the series finale between I-8 Border Rivals capped off a stretch of nine games in 15 days for the Roadrunners. Laurent Dauphin and Curtis Douglas each found the back of the net, while Cam Dineen and Mike Carcone extended their active point streaks to five games apiece with assists. The Roadrunners will take a six-day break before heading to Texas to take on the Stars on Friday, December 30.

Roadrunners forward Curtis Douglas tallied his second goal in as many nights on Friday against San Diego, as he opened the second-period scoring 6:18 into the frame. Douglas netted the final goal for Tucson in both games against the Gulls, including his first score of the season in his 100th career AHL game on Thursday. The six-foot-nine center has appeared in 10 games for Tucson since being acquired by the Arizona Coyotes from the Toronto Maple Leafs on November 23 and has registered a rating of plus-four in that time.

BUSY BIRDS – Friday’s series finale between the Tucson Roadrunners and San Diego Gulls concluded a stretch of nine games in 15 nights for the Roadrunners. Despite not having at least three days of rest since December 5 to December 8, Tucson has earned a standings point in seven of their last ten outings against four different opponents. The Roadrunners are off for six days between Friday’s matchup with the Gulls and their series opener with the Texas Stars on Friday, December 30.

The Roadrunners and Mascot Dusty celebrated Festivus at the Tucson Arena Friday night when they took on the San Diego Gulls, inspired by Seinfeld and the classic episode “The Strike”. Fans were able to take pictures with Dusty and his Festivus Pole, while Tucson defenseman Devante Stephens aired his grievances on the ice with his second fight of the season.

“I think we’ve learned a lot to this point. Our team really got off to a great start and we started to learn a lot through some of the losses that came afterwards. It’s a good thing to go through so many of these lessons early on, and I think we’re in good shape.”

Roadrunners Head Coach Steve Potvin on his takeaways from the first 28 games of the 2022-2023 AHL Regular Season. Tucson heads into a six-day break with a 14-10-4-0 record with two games remaining in the 2022 calendar year.

The Gulls opened the scoring in Friday’s contest for the first time in four meetings with the Roadrunners on the season. San Diego’s opening tally was their first five-on-five goal of the two-game set, and it gave them their first lead of the series at 1-0 with 8:21 gone by in the first period. The Gulls scored their second even-strength goal of the week 6:51 later to extend their early advantage to 2-0. Tucson answered back less than a minute later with their seventh power-play strike in their last three contests to get on the board and cut the deficit to 2-1. The puck was sent in by Cam Dineen, and Laurent Dauphin tipped it home for his 12th goal of the season. Mike Carcone also factored into the goal with the secondary assist, as he and Dineen extended their team-leading point streaks to five games apiece. Dauphin’s tally was the end of Friday’s first-period scoring, as the Roadrunners trailed by one after 20 minutes of play. Tucson kept the momentum from their late first-period tally and found the back of the net again early in the second to tie the contest at 2-2. Forward Curtis Douglas lit the lamp for the second time in as many nights 6:18 into the middle frame, with assists from Vlad Kolyachonok and Hudson Elynuik. The Gulls got their lead back just over five minutes later with their first power-play goal of the night, making the score 3-2 with 8:41 remaining in the period. San Diego opened the scoring in the third period with a pair of goals in the first 6:39 of the frame to push their lead out to 5-2, the largest advantage of the contest. The action continued less than a minute later as Tucson’s Devante Stephens and San Diego’s Hunter Drew dropped the gloves in Stephens’ second fight of the season. Trailing by three, Tucson pulled goaltender Ivan Prosvetov with just under seven minutes still to play in regulation to attempt a late comeback. The Gulls put an end to the Roadrunners six-on-five attack after by burying an empty-net goal with 23 seconds left in the contest, securing a 6-2 victory and a series split.

Tucson Roadrunners Road Ahead: Closing Out The Calendar Year
Scroll to top