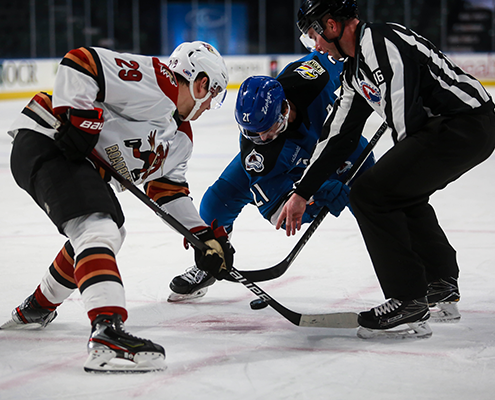 ROADRUNNERS RETURN TO THE ICE, FALL TO EAGLES IN FIRST MATCHUP OF THE SEASON

Loveland, Colorado – The Roadrunners went on the road once again Wednesday evening, taking on the Colorado Eagles at the Budweiser Events Center. The Eagles wound up winning their home opener 3-1.

After a first period that saw three Tucson penalty kills and no goals scored by either team, the Eagles opened up the scoring nine minutes into the second period. The Roadrunners tied it at one off of a power-play goal by Victor Soderstrom from the blue line, but Colorado would take the lead two minutes later. Colorado would add to their lead early in the third with a goal by Greg Pateryn, his third of the year. The Eagles would hold on to the lead and earn their second win of the season. The Roadrunners suffered their first loss of the season, and now sit at 4-1-0-0. Roadrunners goaltender Ivan Prosvetov made his fifth straight start for Tucson, making 29 saves. Lane Pederson and Michael Bunting each picked up assists on the Soderstrom goal, their fifth and fourth of the season, respectively.

The Roadrunners continue their road series against the Eagles Friday night, February 26th at the Budweiser Events Center in Loveland, Colorado, at 7:00 p.m. You can listen to the game in Tucson on FOX 1450 AM and on the iHeart Radio app or watch the game on AHL TV.

“Obviously not the results we were looking for, but I’m not upset with the effort. It was simply our puck management and our attention to defensive zone details were under par for this group.”

Roadrunners head coach Steve Potvin after the game on his team’s performance in Wednesday night’s 3-1 loss to Colorado.

DON’T OVERLOOK IT
POWER-PLAY PROWESS – Victor Soderstrom had the lone goal for the Roadrunners Wednesday night, a power-play snipe from the blue line in the second period. Soderstrom is the youngest player on the Roadrunners’ roster and the only player born in the year 2001 or later.

Watch as Victor Soderstrom sends this slapshot to the back of the net for his first goal of the season Wednesday night. This was Soderstrom’s second point of the 2021 season, after recording an assist against Ontario on Valentine’s Day.

Kyle Capobianco returned to the Tucson Roadrunners Wednesday night, after spending the start of the season in Phoenix with the Arizona Coyotes and their taxi squad. Capobianco was an AHL All-Star last season for the Roadrunners and led defensemen in points per game across the AHL