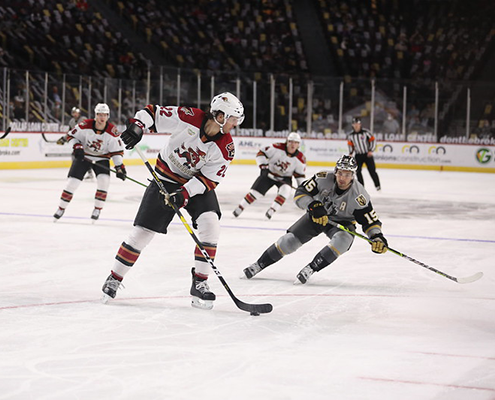 Las Vegas, Nevada – The Tucson Roadrunners traveled to Las Vegas to visit the Henderson Silver Knights on the road for the first time in franchise history. Tucson played a solid game but were plagued by some unlucky breaks, eventually falling to the Silver Knights in overtime by a score of 2-1. Chris Nell made his second straight start for the Roadrunners, stopping 24 shots on goal. Tyler Steenbergen scored his fourth goal of the season, and third on the year against Henderson.

Tyler Steenbergen opened the scoring in Thursday night’s contest with a slick move to push the puck past Henderson goaltender Logan Thompson, giving the Roadrunners a 1-0 lead nine minutes into the first period. It was the first time in four games this season against the Silver Knights where Tucson got on the board first. The Roadrunners killed off a Henderson power-play, putting them at a perfect 35 for their last 35 attempts on the penalty-kill. Tucson improved to 36-for-36 when they opened the second period with Jan Jenik in the penalty box for roughing at the conclusion of the first period. The Silver Knights evened the score at one midway through the second period while shorthanded, their fourth shorthanded goal of the season. The teams went on a pair of 4-on-4 situations after some brief altercations, but no scoring came out of it, and the teams entered the final frame still tied at one goal apiece. The Roadrunners had several scoring opportunities in the third period, but couldn’t get the puck to bounce in. Meanwhile, the Silver Knights had few scoring chances, but were denied by Roadrunners goaltender Chris Nell whenever they came close. The game wound up going to overtime for the first time in the brief history between these two teams. In the end, the Silver Knights were able to pick up the second standings point when the puck deflected into the air and landed in the back of the net, handing the Roadrunners their second overtime loss of the season.

The Roadrunners take Friday off before facing the Henderson Silver Knights again Saturday and Sunday to wrap up the season series. Puck drop on Saturday is scheduled for 7:00 p.m. MST. You can listen to the game in Tucson on FOX Sports 1450 AM and on the iHeart Radio app or watch the game on AHL TV.

“I thought the boys played well tonight. We had some moments during the game we needed to sort out and we did. [Chris] Nell made some big saves at key times to keep us in the game. We’re collectively looking forward to the next one.”

DON’T OVERLOOK IT
PENALTY-KILL PREVAILS – The Roadrunners were a perfect 2-for-2 on the penalty-kill versus the Henderson Silver Knights Thursday in Las Vegas, improving to a more impressive 36 for their last 36 shorthanded situations in away games. The game featured multiple 4-on-4 situations due to coinciding penalties, but neither team could capitalize in those moments.

Watch Tucson Roadrunners forward Tyler Steenbergen open the scoring in the first period of Thursday’s clash with the Henderson Silver Knights, with a shootout-caliber move on the breakaway to slip the puck past reigning AHL Goaltender of the Month Logan Thompson. Steenbergen now has four goals on the season, three of which coming against the Silver Knights after his two-goal performance in the last meeting between these two teams.

The Tucson Roadrunners traveled to the Orleans Arena in Las Vegas for the first time in franchise history. The Henderson Silver Knights home ice in their inaugural season this year is the first opposing arena the Roadrunners have visited this season to have fans in attendance. The Roadrunners will travel to Texas in May to take on the Stars, the only other opponent on Tucson’s schedule allowing fans into their arena.