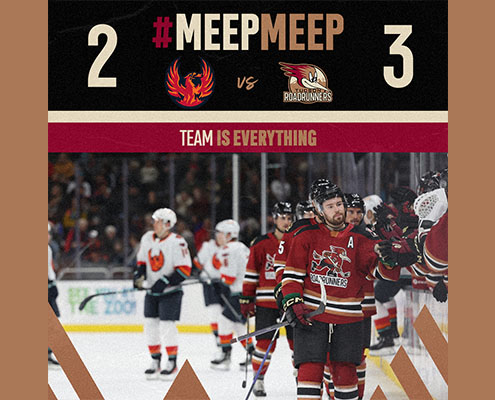 Tucson, Arizona – The Tucson Roadrunners took on the Coachella Valley Firebirds for the sixth time this season Tuesday night, as they netted three power-play goals to secure a 3-2 victory and win two of three matchups on their three-game road trip. Forward Mike Carcone extended his league lead for total points with two goals and an assist, while goaltender Ivan Prosvetov held the Firebirds scoreless for the final 24:26 with 31 total saves. The Roadrunners improved to 13-9-4-0 with the win and will head home to Tucson for a pair of games with the San Diego Gulls on Thursday, December 22 and Friday, December 23.

Roadrunners forward Mike Carcone beat the buzzer in the second period of Tuesday’s 3-2 win over Coachella Valley with a power-play goal in the final seconds of the middle frame. The eventual game-winning goal was Carcone’s second time lighting the lamp on Tuesday and the 15th goal on the season for the current AHL scoring leader.

SPECIAL-TEAMS SHINE – The Roadrunners dominated on special-teams for the second-straight Tuesday night against the Firebirds, as they scored all three of their goals on the man-advantage while posting a perfect six-for-six mark on the penalty-kill. Tucson has netted ten power-play goals over their last five meetings with the AHL affiliate of the Seattle Kraken and have scored on the man-advantage in five of their last six contests overall.

Tucson Roadrunners forward Mike Carcone factored into all three of Tucson’s goals in their 3-2 win over Coachella Valley Tuesday night. Carcone gave the Roadrunners a 1-0 lead 12:02 into the first period on the power-play and scored the eventual game-winner on the man-advantage with one second left in the middle frame. The contest marked Carcone’s third multi-point outing over the last five games and extended his lead for total scoring in the American Hockey League to 38 points (15g 24a). The 26-year-old extended his active point streak to three games and has posted five multiple-point performances over his last eight appearances.

“That was a big win for us. We had been battling [Coachella Valley] a lot over our last games, so it was nice to get one to end the road trip.”

Roadrunners forward Laurent Dauphin on Tuesday’s 3-2 win over the Coachella Valley Firebirds. Dauphin tallied a power-play goal and an assist for eight points (5g 3a) over his last five outings.

The Roadrunners jumped out to their first lead of the series with a power-play goal by Mike Carcone 12:14 into the opening frame. The score was Carcone’s 14th goal of the season and extended his league lead for total points in the AHL to 37. The Firebirds answered right back with a goal just nine seconds later to even the score back up at 1-1. With Tucson and Coachella Valley still knotted at one after the first period, the Roadrunners second power-play goal of the contest retook the lead at 2-1 with 3:12 gone by in the middle frame. Laurent Dauphin lit the lamp on the man-advantage for his 11th goal of the season and fifth goal in as many games, with assists from Cam Dineen and Mike Carcone. The Firebirds answered back again with another even-strength goal with 2:26 remaining in the second period to make it a 2-2 game late in the frame. The score came while skating four-on-four following a fight between Tucson’s Hudson Elynuik and Coachella Valley’s Carsen Twarynski, Elynuik’s third time dropping the gloves this season. With six seconds remaining in the middle period, the Roadrunners were awarded a power-play with a chance to retake the lead. Mike Carcone took the opportunity to beat the buzzer with one second left in the period for his second go-ahead power-play goal of the contest, as his league-leading 39th point gave Tucson a 3-2 advantage entering the final 20 minutes of play. The Roadrunners and goaltender Ivan Prosvetov weathered the third-period storm of ten shots on goal and a pair of power-plays for the Firebirds to secure a 3-2 victory and a winning record on their three-game road trip. Tuesday also marked the first win by the visiting team at the new Acrisure Arena.