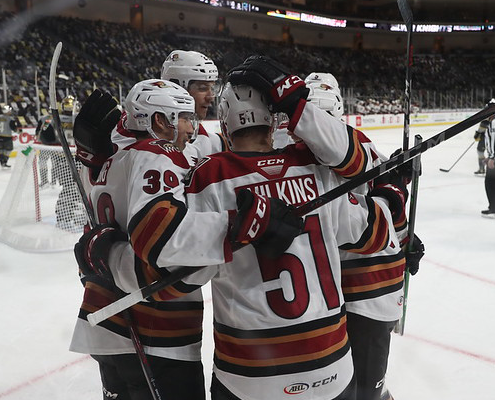 Las Vegas, Nevada – The Tucson Roadrunners had been leading in several stat categories this weekend in their series with the Henderson Silver Knights. Sunday evening’s contest was no exception, as Tucson led in shots on goal, power-play goals and penalty-kill percentage, to name a few. The Roadrunners added one more crucial category to the list in the final game of the series: Goals. The Roadrunners defeated the Silver Knights by a score of 3-2, earning their tenth win of the season and handing Henderson their seventh loss. Ivan Prosvetov once again started for the Roadrunners, stopping 27 shots and earning his first win since the first month of the AHL season.

The teams traded early offensive possessions in the first period, before both teams were assessed a minor penalty when Kevin Roy and Cody Glass got tied up near the benches. The Roadrunners wasted no time on the 4-on-4 situation, as Frederik Gauthier picked up his first goal of the season 22 seconds later. Gauthier traversed nearly the full length of the ice to bury the breakaway goal and give Tucson a 1-0 lead. The Roadrunners added to their first period lead when Cameron Hebig took a set-up pass from Josh Wilkins to sneak the puck by Henderson goaltender Logan Thompson. The backhand goal was Hebig’s third of the season and gave Tucson a crucial 2-0 lead after the first period. Tucson quickly drew another penalty to start the second period and cashed in on it to increase their lead to 3-0. Tyler Steenbergen had the goal, his sixth of the year, extending his point streak to six games and setting a new team high for the season. Henderson got on the board midway through the second period, with a shorthanded goal by Brayden Pachal to make the score 3-1 in Tucson’s favor. Henderson pulled to within one in the final 2:30 of the second period, when a 2-on-1 breakaway resulted in a goal for the Silver Knights. The Roadrunners entered the third period holding on to a 3-2 lead, knowing the Silver Knights wouldn’t make it easy to keep. The Roadrunners killed off three separate penalty-kills throughout the period, followed by an extra attacker situation brought on by Henderson. Tucson weathered everything brought on by the Silver Knights to come away with a 3-2 victory, and head home with three of the possible six points against Henderson this weekend.

The Roadrunners return to Tucson for their penultimate homestand, a three-game set with the Colorado Eagles. The first game is scheduled for Thursday, April 22. Puck drop is set for 6:30 p.m. MST. You can listen to the game in Tucson on FOX Sports 1450 AM and on the iHeart Radio app or watch the game on AHL TV.

“It was a well-deserved finish to the week. The mission was to start the weekend positive and finish the weekend on a positive note. It’s great to see the boys complete their mission. Good to see the power-play convert as well as another excellent night from our penalty-kill, and Ivan to secure the victory late in the game.”

Tucson Roadrunners Head Coach Steve Potvin after the game on what it means for the Roadrunners to finish the weekend series with a win.

DON’T OVERLOOK IT
SPECIAL TEAMS SHINE ON SUNDAY – The Roadrunners played a fairly clean game Sunday against the Henderson Silver Knights, avoiding going on the penalty-kill until the third period. In addition to going a perfect three-for-three on the man disadvantage, the Roadrunners scored a power-play goal, along with a 4-on-4 goal on their way to a solid 3-2 win.

Watch Tucson Roadrunners forward Tyler Steenbergen once again score against the Henderson Silver Knights Sunday night, extending his current point streak to six games, a new team high for the season and longest streak of his career. Steenbergen scored five goals in the six games with Henderson this season, including Sunday’s game winner.

Tucson Roadrunners forwards Cameron Hebig, Josh Wilkins, and Brayden Burke celebrate Hebig’s backhand goal in the first period against the Henderson Silver Knights Sunday night. The goal put the Roadrunners up 2-0 and was Hebig’s third score of the season.

Tucson Roadrunners Road Ahead: Week of April 19, 2021
Scroll to top