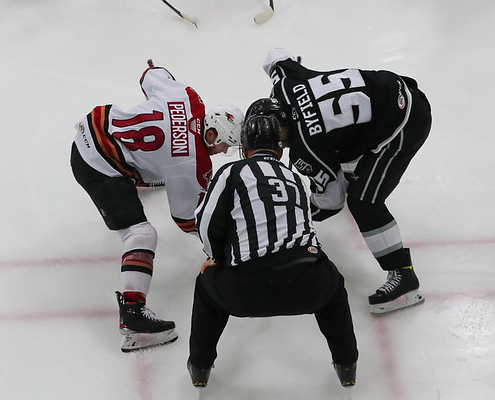 ROADRUNNERS GO OUT ON THE ROAD, SUFFER 5-3 LOSS TO ONTARIO IN BACK-AND-FORTH BATTLE

El Segundo, California – The Tucson Roadrunners traveled to Los Angeles County Friday night to face the Ontario Reign at the Toyota Sports Performance Center. Tucson jumped out to a 3-2 lead after the first period, but couldn’t hold off the Reign, losing in regulation 5-3 and dropping their record to 5-6 on the season.

The Reign struck first in Friday night’s contest, the first time they had done so in their three games with the Tucson Roadrunners this season. Arthur Kaliyev had the goal only 3:50 into the first period for Ontario. Tucson was not interested in playing from behind early on, so they quickly answered back with a pair of goals by Doyle Somerby and Lane Pederson to take a 2-1 lead. Their goals were scored 23 seconds apart, the fastest two goals the Roadrunners have scored consecutively so far this season. Ontario tied the game with six minutes to go in the first period, but Kevin Roy retook the lead for the Roadrunners in the waning moments of the period to send Tucson to the locker room with the score at 3-2 in their favor. Ontario tied the game yet again midway through the second period, off the stick of Samuel Fagemo, his sixth goal of the season. Friday night’s game was tied at 0-0, 1-1, 2-2 and 3-3. With 8:45 left to go in regulation, Ontario took their first lead since they struck first to make it 1-0 in the first period. A goal by Aidan Dudas on the empty net secured the win for the Reign in the final 1:07 of regulation, and dropped the Roadrunners record to 5-6. Connor LaCouvee made his second start of the season for the Tucson Roadrunners, stopping 25 of 29 shots faced.

The Roadrunners wrap up their two-game road trip Saturday, March 13, versus the San Diego Gulls in Irvine, at 8:00pm MST. You can listen to the game in Tucson on FOX Sports 1450 AM and on the iHeart Radio app or watch the game on AHL TV.

“This is a test; it’s not going to get any easier. We can’t hang our heads and doubt our process, we need the next level of buy-in for a full sixty minutes.”

Tucson Roadrunners head coach Steve Potvin after the game on how the team can move forward following Friday night’s 5-3 loss to the Ontario Reign.

DOYLE DOUBLE – Tucson Roadrunners defenseman Doyle Somerby became the ninth Roadrunners skater to record a multi-point performance through eleven games in the 2021 AHL season. Somerby had the Roadrunners first goal of the game in the first period and tallied an assist on their second score 23 seconds later.

Watch as Roadrunners forward Kevin Roy scores his team-leading seventh goal of the season in Friday night’s clash with the Ontario Reign. In his first year with the Roadrunners, Roy already has four multi-point performances, including this goal and an assist Friday night.

Tucson Roadrunners goaltender Connor LaCouvee stands tall in net during Friday night’s matchup with the Ontario Reign. LaCouvee, who spent last year with the Maine Mariners of the ECHL, stopped 25 of the 29 shots he faced in his second start of the season for the Roadrunners.