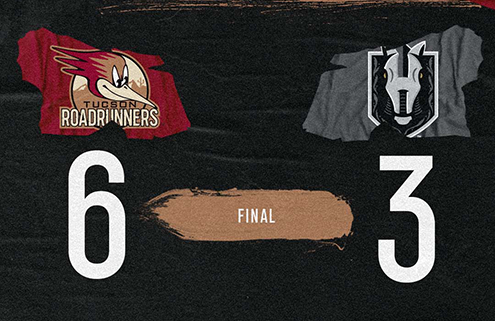 Las Vegas, Nevada – The Tucson Roadrunners clashed with the Henderson Silver Knights for the first time in over a month Friday night, as they traveled to Las Vegas for the first time since early November. Henderson jumped out to a 2-0 lead in the opening frame, before Tucson answered back with four consecutive goals in the second period and pair of power-play strikes late in the third to come away with a 6-3 road victory. Seven different players recorded multiple points for the Roadrunners and goaltender Ivan Prosvetov stopped 28 of 31 shots faced in the win.

Watch Tucson Roadrunners forward Jan Jenik get the team on the board 26 seconds into the middle frame Friday night against the Henderson Silver Knights. The score began a stretch of four-straight goals in the span of 8:38 to erase a 2-0 deficit and create a 4-2 advantage for Tucson. Jenik finished the night with a goal and an assist in his first game back with the Roadrunners after a call-up to the Arizona Coyotes.

BACK WITH A BANG – The Roadrunners had several key players return to the lineup Friday night against Henderson: including forwards Jan Jenik and Terry Broadhurst. The pair combined for two goals and three assists in the second period alone, as Broadhurst and Jenik netted back-to-back goals to erase a 2-0 deficit. Defenseman Andrew Nielsen also returned to the Roadrunners lineup for the first time since March 5, as he tallied a pair of assists late in the third period.

Roadrunners forward Colin Theisen appeared in his second game for Tucson Friday night against the Henderson Silver Knights in Las Vegas. The 24-year-old tallied his first professional goal and assist in the Roadrunners 6-3 win, after joining the team from Arizona State University earlier in the week. His goal was the second of back-to-back power-play goals in the third period to secure the comeback victory for Tucson.

“I thought we stuck with it. After the first intermission [down 2-0], we knew what we had to do. We came out and did all the little details right and kept that going throughout the game.”

The action began early Friday night with a fight between Ben McCartney and Brayden Pachal exactly one minute into the contest. The bout marked McCartney’s third time dropping the gloves this year and the second fight between Tucson and Henderson on the season. The first goal of the evening wouldn’t be until the final 5:05 of the opening frame, when Henderson took a 1-0 lead. The Silver Knights added another score in the final 48 seconds of the period to carry a 2-0 advantage into the second period. Tucson had an answer and then some in the second, as they netted four consecutive goals in the first 9:04 of the middle frame. The first was scored by Jan Jenik in his first game back from an Arizona Coyotes call-up, extending his active team lead for goals to 16. The next came from Terry Broadhurst in his first game back from injury with 3:45 gone by in the frame. The score gave both Broadhurst and Jenik multiple-point performances with a goal and assist each. Joining them with a goal and an assist was Ben McCartney 3:18 later as he recorded his 11th tally of the season, with Terry Broadhurst notching another assist for a three-point performance. McCartney’s goal was fired in toward the net by defenseman Cole Hults, who proceeded to score the fourth and final goal of the period for the Roadrunners, earning him a multi-point outing as well. Recording an assist on the Hults goal was Colin Theisen for his first professional point in just his second game with the Roadrunners, after joining the roster from Arizona State University earlier in the week. After falling behind 2-0 in the opening frame, Tucson had rallied back to take a 4-2 lead before the midway point of the second period. Henderson got a goal back to cut the Roadrunners lead to 4-3 just seven seconds into the power-play and with 4:05 remaining in the middle frame. The Roadrunners and Silver Knights skated four-on-four as the second period ended, with Tucson still leading by a goal. All the Roadrunners had to do to secure a series-opening win was keep the Silver Knights off the scoreboard in the final 20 minutes. Tucson did that and more, as they held Henderson to just eight shots on goal while adding a pair of insurance goals on the power-play to come away with a 6-3 victory.

The Roadrunners will conclude their season series with the Henderson Silver Knights Saturday afternoon at the Orleans Arena, as they’ll also wrap up the three-game road trip to end the month of March. Saturday’s matinee matchup is scheduled for 3:00 p.m. MST, with coverage beginning at 2:45 p.m. MST on Fox Sports 1450AM with Roadrunners Warm-Up hosted by Jimmy Peebles. Then, “Voice of the Roadrunners” Adrian Denny will have all the action live from Las Vegas.