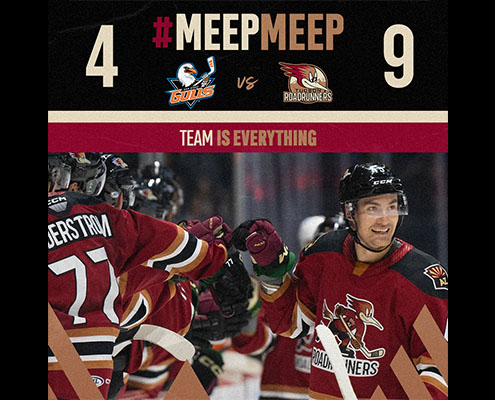 San Diego, California – The Tucson Roadrunners kicked off a three-game road trip over four nights beginning on Saturday with their second meeting of the season against the San Diego Gulls. The Roadrunners came out firing to take a 3-0 lead over the AHL affiliate of the Anaheim Ducks in the first four minutes, before eventually securing a 9-4 victory at the Pechanga Arena to improve to 12-8-4-0. 13 different Roadrunners notched a point as Tucson matched a franchise record for goals in a game, while setting a franchise record for goals in a period with six scores in the opening frame. Goaltender Ivan Prosvetov set a season high for saves with 39 of 43 shots turned aside. The Roadrunners will continue their road trip with a pair of games against the Coachella Valley Firebirds Sunday, December 18 and Tuesday, December 20, before returning home to face the Gulls on Thursday, December 22 and Friday, December 23.

The Tucson Roadrunners matched their franchise record for goals in a game on Saturday in San Diego when they defeated the Gulls by a score of 9-4. Mike Carcone, Laurent Dauphin and Nathan Smith each tallied a pair of goals, while Adam Cracknell, Vlad Kolyachonok and Cam Dineen also lit the lamp for Tucson. The last time the Roadrunners netted nine goals in a contest was on May 1, 2021, on the road against San Diego.

REWRITING HISTORY – The Roadrunners set a pair of franchise records during the first period of Saturday’s 9-4 victory over the San Diego Gulls. Tucson tallied a team record six goals in the opening 20 minutes of play against their I-8 Border Rivals, which started by Laurent Dauphin and Mike Carcone scoring ten seconds apart for the fastest consecutive goals in team history. Tucson’s nine total goals in the contest also matched a franchise mark, and defenseman Ronald Knot’s plus-five rating was the highest in a single game by a Roadrunners skater. The records come just two games after Tucson set a team record for the most power-play goals in a game, with five against the Coachella Valley Firebirds on Tuesday, December 13.

Tucson Roadrunners forward Mike Carcone tallied his second four-point performance over his last three games with two goals and two assists in Saturday’s 9-4 win over the San Diego Gulls. The outing moved Carcone into sole possession for the AHL lead in total scoring, as the 26-year-old has amassed 35 points (13g 22a) in 23 games this year. Carcone is currently the only player in the American Hockey League with at least 10 goals and 20 assists.

“I’ve said it before, some nights [the points] are going to fall for you and some nights it’s a bit harder. [Saturday] was one of those nights where it felt like pucks were going in, and the guys did a good job.”

Roadrunners forward Mike Carcone on Tucson’s strong offensive performance in Saturday’s 9-4 win over San Diego. The nine goals scored by the Roadrunners matched a franchise record from May 1, 2021.

The Roadrunners jumped out to a 3-0 lead in the first four minutes of play on Saturday, beginning with the fastest consecutive goals in team history. Laurent Dauphin opened the scoring with his eighth of the season and Mike Carcone followed him up ten seconds later with his 12th to beat the previous Roadrunners record by three seconds. Adam Cracknell kept it going 35 seconds later with his tenth goal of the year to give Tucson their third score in the span of 45 seconds and with just 3:59 gone by in the opening frame. The Gulls got on the board 5:34 into the period on their first power-play of the night to make it a 3-1 game and ignite their Teddy Bear Toss. The Roadrunners didn’t miss a beat coming out of the break, as they added to their early scoring with their fourth score of the game and Mike Carcone’s second goal of the contest to retake their three-goal lead at 4-1. Forward Nathan Smith joined in on the action with 4:37 remaining in the opening frame with his sixth goal of the season and Tucson’s first power-play goal of the night, as they had recorded just the fifth five-goal period in team history. Laurent Dauphin made Roadrunners history with 1:26 left to play in the period, as he netted his second goal of the night and Tucson’s sixth score of the opening frame to set a new franchise record for goals in a period. After 20 minutes of play, forwards Mike Carcone (2g 1a) and Adam Cracknell (1g 2a) had already recorded three-point nights, as the Roadrunners led by a count of 6-1. The Gulls grabbed the first goal of the second period and San Diego’s first even-strength tally of the contest just 39 seconds into the frame to cut Tucson’s advantage to 6-2. San Diego was awarded a penalty shot with 6:20 to play in the middle frame and made it a 6-3 Roadrunners lead with a successful attempt by Justin Kirkland. The Gulls capped off a three-goal second period with 3:07 left in the frame, reducing Tucson’s lead to 6-4 entering the final 20 minutes of play. Vlad Kolyachonok buried a pass from Ryan McGregor for his first goal of the year to put the Roadrunners up 7-4 and match their season high for goals in a game, which they set on Tuesday, December 13 at home against Coachella Valley. That was quickly broken, Nathan Smith found the back of the net 4:51 later to join Mike Carcone and Laurent Dauphin as the three Roadrunners with two goals on the night. Cam Dineen rounded out Saturday’s scoring in the final 1:55 with his second goal of the season and Tucson’s ninth tally of the game to match a franchise record, which they set on the road against the Gulls on May 1, 2021. Dineen’s goal capped off the 9-4 Roadrunners win over San Diego at the Pechanga Arena, as Tucson will head to Coachella Valley to square off with the Firebirds Sunday night at the new Acrisure Arena.