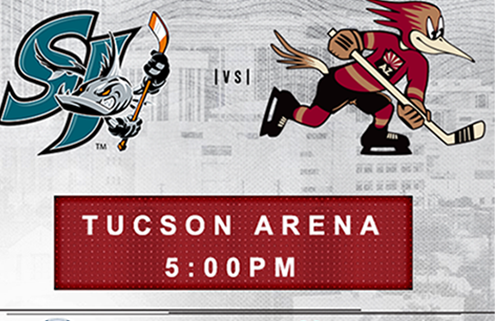 The Roadrunners play their third game in four days this afternoon at 5 p.m. against the San Jose team that they’ll see again Monday in preseason action and then in three-straight games to open the regular season in Tucson on February 5. Tucson scored seven of the final nine goals of the final 94 minutes of their just completed two-game series in Ontario that finished Monday with a 4-2 win. San Jose enters today 1-1-0-1 in the preseason after a shootout loss to Ontario Friday and splitting two games against San Diego earlier last week.

2) Defenseman Cam Dineen tallied an assist in each game in California Sunday and Monday and had a series leading seven shots on goal in game on Sunday.

3) Tucson went 2/8 on the power-play and 9/9 on the penalty-kill during the first two games in California. Kevin Roy assisted on both power-play goals Sunday.

What’s The Word?
Michael Bunting to Brett Fera of the Arizona Daily Star as the Roadrunners start five-straight games against San Jose and Eight of their next ten contests agains the Barracuda

“The only time we’ve ever done something like this before is a playoff series. I can guarantee you by Game 3, you basically hate each other.”

Number to Know
12- Newcomer Kevin Roy, wearing #12, had two assists in each game over the weekend in California to lead the way in scoring for Tucson. He had 10 goals and 11 assists for 21 points in 32 games last year with Wilkes-Barre Scranton of the AHL after playing the previous four seasons with Anaheim and San Diego.

We’re Doing It Live
Roadrunners Hockey returns to the radio tonight at 5 p.m. as “Voice of the Roadrunners” Adrian Denny brings you all of the action on Fox Sports 1450 AM. From here on out, all Roadrunners games will be broadcast live on Tucson’s Sports Station with AHL TV joining the action for the regular season opener on February 5.