The Bakersfield Condors continued their winning week, sending the Roadrunners into the All-Star Break on a sour note with a 4-1 defeat Saturday.

Despite an early surge from the home team, it was Bakersfield that opened the scoring just over five minutes into the contest.  Then, 42 seconds later they would double their lead for a 2-0 advantage.

Coming out of the first intermission trailing by the same score, Kelly Klima, who was promoted to the team’s top line for the contest, made the most of his opportunity and brought Tucson back within one on a remarkably placed wrist shot.  Bakersfield was attempting to stretch the puck out of their own end and All-Star Brayden Burke intercepted, setting up the streaking Klima for his fifth of the year from the top of the glove-side circle.

That would be as close as the Roadrunners would get to tying up the contest though, as a third period power play goal and an eventual empty netter would finalize the contest in 4-1 favor of the Condors.

Goaltender Adin Hill suffered his first loss of the season at Tucson Arena with the three goals getting by him on 24 shots.

“Give credit to them, they blocked a lot of shots.  You have to sacrifice and be willing to do that to win games.  They played with a playoff mentality the last two nights and I don’t think we did.”

Miele would continue on to say that the team hadn’t been the best version of themselves since the last break, which took place over the holidays, and a 5-5-1 record since would indicate that to be true.

The majority of the team will take time away from the rink between now and Wednesday and perhaps that is just what the group needs before hosting a difficult Colorado team next weekend.

The lone goal of the night was a dazzling one.

Make sure your volume is up for this, as the ring of the crossbar, post combination is something to behold following this release.

Credit where credit is due, again, the game was THIS close to being tied in the third period on a Hudson Fasching modified breakaway.  Stuart Skinner worked from left to right just fast enough to be there. 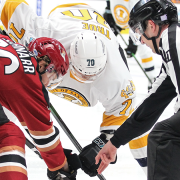