For the first time since October 30ththe Roadrunners suffered a loss on home ice, having their eight-game winning streak come to an end at the hands of the Colorado Eagles.

Falling behind the eight ball just 1:28 in, Tucson through the first 41:34 of the contest before Lane Pederson got his 15th of the year to bring the home team back within one.

Pederson’s tally ignited a three-goal third period for the Roadrunners, however, before Dysin Mayo and Andy Miele scored for Tucson, Colorado regained their two-goal lead.

Despite having the momentum with the game tied and only nine minutes to play in regulation, a power play tally from the Eagles proved to be the deciding factor.

“We have to control our own destiny better.  It’s more about how we need to play our game from the beginning of the game.  They went up 1-0 on us early in the game because of an odd-man attack and that’s just something we don’t do.”

It was a fun run with lots of positive moments in the team’s eight-game winning streak that started December 3 against the same Colorado Eagles, however, the team’s mantra for so long now has been “we want to get points while we can”.

With tomorrow being Game #30 already, it’s safe to say they’ve done a good job at that.  So much so, that the team’s 23-6 record has earned Jay Varady the representation of Head Coach of the Pacific Division at the 2020 AHL All-Star Classic, which was announced by the league following Saturday’s game.

The momentum was in full swing when Andy Miele tied the game in the third period and the Tucson Arena crowd was all-in on the comeback effort.

Take a look at the work by Beau Bennett to make it happen.

PHOTO OF THE GAME (Photo)

It may not have been the result Tucson wanted tonight, but the team still remained the best dressed in the league on Saturday’s. 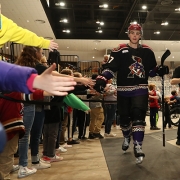