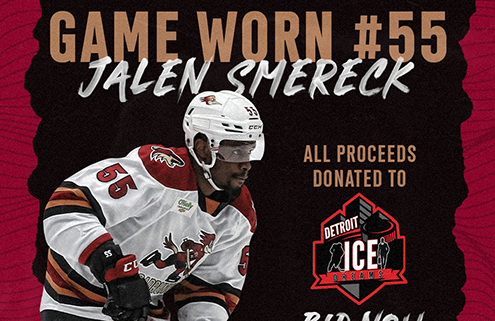 Tucson, Arizona – Tucson Roadrunners defenseman Jalen Smereck is auctioning off one of his game worn jerseys to benefit Detroit Ice Dreams, an organization that he works closely with in his hometown of Detroit, Michigan.

Bidding for the jersey, as part of the organization’s Black History Month celebration is underway at TucsonRoadrunners.com/Dreams. Jalen wore the Roadrunners jersey during the 2019-2020 season. The auction will run through February 28 at 11:59 p.m. Mountain Standard Time.

Detroit Ice Dreams Hockey Association is a 501(c) (3) youth hockey organization that minimizes the barriers, which prevent underrepresented communities from access to ice hockey a non-traditional sports within their neighborhood. Detroit Ice Dreams encourages more than just hockey, they stress accomplishing great things on and off the ice. Ice Dreams supports the need to establish positive values, goals, invaluable life skills and positive involvement in the community as leaders and productive members of society.

“The Roadrunners and our fans are honored to partner with Jalen Smereck and Detroit Ice Dreams to support a wonderful organization that’s mission aligns with the Roadrunners community vision as well,” said Roadrunners President Bob Hoffman. “Jalen has been part of the Roadrunners family for all five seasons that we’ve been in Tucson and is a tremendous community ambassador as well as a great hockey player with values that shine through on and off the ice. We are proud to celebrate Black History Month with the Arizona Coyotes and our hockey community.”

“They do so much,” said Smereck on Detroit Ice Dreams. “The money we raise, whether it’s going to get more hockey equipment for the kids, pass out food to people in need and are out, they do so many different things for the community. I’ll be 100-percent behind them as soon as I get home and we’ll keep working together; we’re so thankful for the donation.”

Tucson Roadrunners Road Ahead: Week of February 22, 2021
Scroll to top