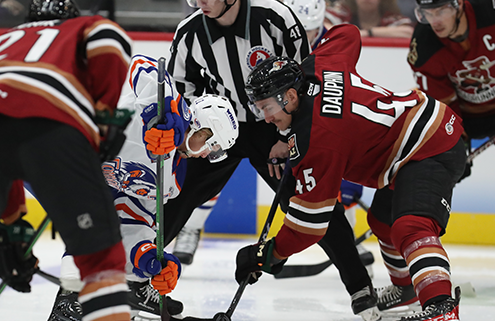 Dauphin leaves the Roadrunners leading the team in goals with five, including a hat trick on Opening Night at Tucson Arena on Saturday, October 22. In total, Dauphin totaled eight points in Tucson’s first eight games as the Roadrunners have raced to a 6-2 start.

The Quebec native was originally drafted in the second round of the NHL Entry Draft by the Coyotes in 2013 and appeared with Arizona during the 2017-2018 and 2018-2019 seasons. He signed back with the organization in July after appearing in 38 games with the Montreal Canadiens during the 2021-2022 season where he totaled four goals and eight assists.

RRTV In The Community: VA Hospital Visit
Scroll to top