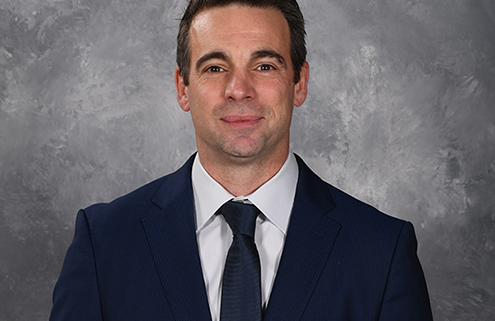 Jason Barr, KGUN-9: What’s it like to have so much time to prepare for one opponent? You guys are going to play Nashville, but it’s not for a few weeks.

It’s a little different, during a regular year, you can guess one, two, or three opponents, who you’re going to play at the end of the regular season. Now we’ve known for several weeks that Nashville is going to be our opponent.

Fortunately for us, our coaching staff took the philosophy of trying to be the best Arizona Coyotes team possible and we think that gives us the best chance to win, so we’re going to really emphasize our own play and make sure that we’re ready to go.

Jason Barr, KGUN-9: There’s eight players that finished the season in Tucson on this playoff roster, how do you see them contributing in this playoff series?

We’re planning on making a long run here and they’re going to make a difference. I think if it’s just a matter of pushing our other players to make sure they’re ready. Or if there’s injuries, they’re prepared to be in the lineup and make a massive difference. For us, there’s a reason why the NHL, picks 30-31 players that are able to go into this hub, it is because that’s the number that it might take to win a Stanley Cup. We figure at some point that some of these players are going to make a massive impact if we do.

David Kelly, KVOA: When you were looking at the guys that you wanted from the Roadrunners to be in this camp, how did you go about who those guys were going to be and what are you expecting from them in terms of helping the club.

Alec White, Arizona Daily Star: What do you make of the Coyotes chances to make a run based on the unpredictablilty of the NHL playoffs?

If you’re at the dance, you have a chance to win right, I truly believe that. There’s 24 teams and every single team believes that they have the opportunity to win and we’re no different. If you look at the start of the year that we had, when we were all healthy, we were in first place for the longest time after the good start. For us, a restart, a reboot is probably exactly what we need. We have a lot of the ingredients to win a Stanley Cup. I think we’ve got some great goaltending, we have about as solid of a defense as it comes. Our deficiencies and our knock around the league is that we don’t score enough goals and we all do know that in the playoffs scoring does go down and I think that plays right into our hands. We think we have two great goaltenders that can get hot and make a long run for us and we’ve got a D corps that can play against any of the top forwards in the league. So we think we’re in a really good position.

Alec White: Arizona Daily Star:  For someone who played the game as long as you did, how do you think not having fans at these playoff games will positively or negatively affect the style of play.

I think it’ll be different, I don’t know if it’ll change the style of play, I think the guys will adapt. I think it’ll be extremely different that first game when we don’t have any fans. You’re so used to a big hit getting a loud roar or some boos if you’re on the road. So knowing how to react and how to get yourself juiced up and not getting it from the crowd might be a little different.