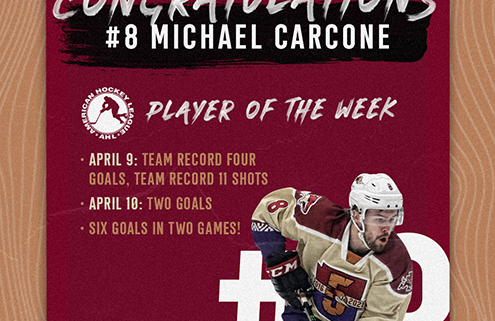 SPRINGFIELD, Mass. … The American Hockey League announced today that Tucson Roadrunners forward Michael Carcone has been selected as the CCM/AHL Player of the Week for the period ending April 11, 2021.

Carcone scored six goals in two games for Tucson last week as the Roadrunners totaled ten goals on the weekend.

Entering the weekend with one goal in his previous 17 games, Carcone scored four times on Friday night and took 11 of Tucson’s 52 shots on goal – the most in a game by any AHL team this season – while also setting all-time Roadrunners records in goals (four) and shots in a single game. It was Carcone’s third career hat trick and the first four-goal effort by an AHL player in more than two years. Then on Saturday, he scored twice more to lift the Roadrunners to a 4-1 victory over the Gulls, with his second-period tally standing up as his first game-winner of the year.

A fifth-year pro from Ajax, Ont., Carcone is now tied for the team lead in goals (10) and has totaled 12 points in 23 games for Tucson this season. Carcone has played 273 games in the AHL with Tucson, Belleville, Toronto and Utica, totaling 63 goals and 65 assists for 128 points.

In recognition of being named the CCM/AHL Player of the Week, Carcone will receive an etched crystal award from CCM.

Tucson Roadrunners’ Road Ahead: Week of April 12, 2021
Scroll to top