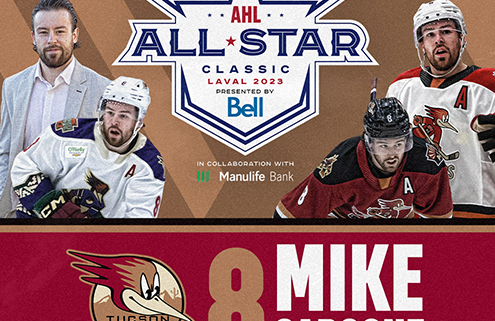 Tucson, Arizona – Tucson Roadrunners Forward Mike Carcone has been selected to represent the organization at the 2023 AHL All-Star Classic presented by Bell in collaboration with Manulife Bank February 5 and 6 in Laval, Quebec.

The third-year Roadrunner returned to the lineup from the Arizona Coyotes on Tuesday night and tallied two goals and one assist after logging two goals in six games and a plus-three in the NHL following his recall on December 27. Last week, he was named the AHL’s Player of the Month for December after totaling 10 goals and 10 assists for 20 points in 10 games for the Roadrunners.

After 306 career AHL games, Carcone made his NHL debut with the Coyotes on December 28, 2021 against San Jose before returning back to Tucson where he broke the team record with 24 goals. Carcone is the first player in team history to lead the Roadrunners in goals in back-to-back seasons after pacing Tucson with 15 goals during an abbreviated 2020-2021 season.

He finished the 2021-2022 season by appearing in 20 games with the Coyotes where he totaled four goals and two assists. Carcone has 57 goals and 44 assists for 91 points in 111 career games with the Roadrunners.

The Roadrunners return to action tonight at 6:30 p.m. hosting Milwaukee at Tucson Arena. It’s a Kids Free Wednesday with Kids 12 and inder being admitted free at the Tucson Arena Box Office with a paying adult. In addition, all Souvenir Cup Soft Drinks purchased at the game can be refilled for $2 all game long.