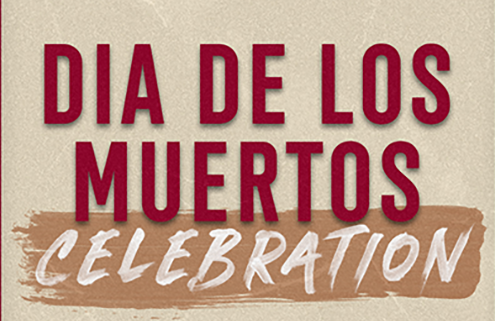 Tucson, Arizona – The Tucson Roadrunners, owned and operated by the Arizona Coyotes, will cap off their Hispanic Heritage Month celebration Friday and Saturday at 7pm by unveiling their 21-22 El Lazo identity against their I-8 Border Rivals the San Diego Gulls heading into Dia de los Muertos.

92.1 y 95.7 La Caliente will be outside Tucson Arena with their playlist rolling prior to the game while Mariachi Los Diablitos de Sunnyside High School will entertain fans inside the arena.

The team is offering a free Roadrunners El Lazo T-Shirt with every ticket purchased by clicking through this LINK. The offer is valid at that link only and while sizes and supplies last.

Fans are invited to bring items to remember/celebrate loved ones who have passed away to place on the ofrenda.

Mascot Dusty will also take on his El Lazo identity as El Polvo, meaning “The Dust” in Spanish for the weekend. There will also be a photobooth for festive pictures to be taken in the breezeway.

During the game, the team has videos and promotions scheduled featuring Dia de los Muertos traditions and celebrations leading up to the All Souls Procession in Downtown Tucson the following weekend.

The Tucson Arena will also be featuring Walking Tacos and Street Corn in a Cup at both games.

Halloween
Saturday, October 30, the first 750 kids 12 and under to enter the Tucson Arena will receive a Roadrunners Trick-or-Treat bag to use after the game for Trick-or-Treating at the arena and a costume parade! Everyone is invited to come in costume.

Pack It Up!
Along with the El Lazo de Tucson identity making a return this weekend, Friday’s game marks the first game of the season to offer Friday Night Party Packs. Party Packs include two premium tickets and a $20 food voucher by clicking HERE. In addition to Friday’s festive ticket offer, Saturday is the first Family Fun Night of the season. Families can save $40 on four tickets and a $20 concession voucher by clicking HERE.

About El Lazo de Tucson
The Roadrunnners ‘El Lazo’ identity is a continuing effort to embrace all that is Southern Arizona and the history and culture of the community. The El Lazo mark features the skull of a Roadrunner in celebration of Dia de Los Muertos and the All Souls Procession (a public ceremony began in Tucson in 1990). El Lazo, Spanish for ‘lariat’ or ‘lasso’, is  taken from the City of Tucson’s city seal that ties together the modern city and the historic area that is now Tucson. The Tucson Rodeo and Parade is held every February and celebrates the ranching history of the area. The skull in the logo is wearing a cowboy hat to reflect this historic tradition in Southern Arizona. The team unveiled their El Lazo identity in 2020 and skated in their El Lazo jerseys for three games during the 2020-2021 season.  2021-2022 will mark the team’s second season featuring games in their El Lazo identities. They will also be in their El Lazo jerseys for games on Friday, January 28 and Friday, April 2.