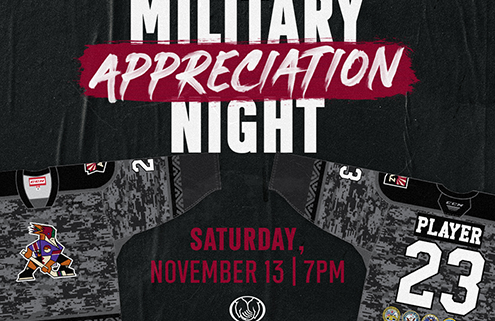 Tucson, Arizona – The Tucson Roadrunners, owned and operated by the Arizona Coyotes, will honor and thank active military and veterans this week leading up to the team’s Military Appreciation Night game Saturday night against Ontario at 7 p.m. from Tucson Arena.

Saturday night the Roadrunners have teamed with the Allstate Brittni Linae Gutman Insurance Agency, LLC and our valued Season Ticket Members to donate game tickets to active and retired military members and their families. Roadrunners players and Head Coach Jay Varady will also be sharing video messages throughout the night to personally thank the veterans and current military members.

In the arena, the Roadrunners are proud to welcome friends from Davis-Monthan Air Force Base to perform the Star-Spangled Banner with their Color Guard and also participate in the game’s ceremonial first puck drop. There will also be Roadrunners military themed postcards for fans to write thank you notes on that will be shipped to servicemembers. At the Roadrunners Give Back table, player signed sticks wrapped in camouflage tape will be on sale to benefit the foundation. Roadrunners Give Back is a branch of the Arizona Coyotes Foundation.

And finally, the team has partnered with Veteran Rescue Mission to collect donations of gift cards and old electronics as fans enter the arena. Veteran Rescue Mission is a Veteran led front searching for all homeless Vets in order to pair them with their earned benefits, in an effort to minimize Veteran recidivism, and suicide. Their primary objective is to distinguish the need of Veterans with low incomes, in Arizona and the greater United States, educate the public on the research gathered, and work with the public to address the need distinguished. More information on the Veteran Rescue Mission can be found HERE . They also host The Voice Common Good Radio Show every Sunday on www.KVOI.com 1030AM to highlight the people and organizations doing Good in Tucson Hosted by Pastor Jon McLane and Andres Ruiz.