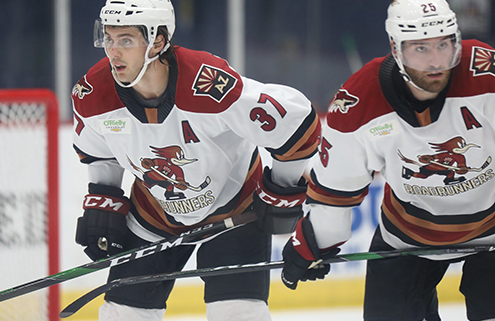 Tucson Roadrunners Playoff Road Ahead: Week of May 17, 2021

Who’s On The Schedule
The Tucson Roadrunners will travel to Irvine, California to take on the San Jose Barracuda in the first game of the 2021 AHL Pacific Division Playoffs. The game with San Jose is a single-elimination contest, with the winner moving on to play the next day. Their opponent will be the winner of the Ontario and Colorado game, as those two teams will play at 7:30 p.m. Tuesday evening. The Roadrunners have not seen the Barracuda since the first two games of the season, where San Jose was the official home team. The Roadrunners won both contests to start the season 2-0.

Keeping It Consistent
The Roadrunners are entering the opening week of the playoffs with the same roster they had the week before, something they haven’t done since the first two weeks of the regular season, where the team started 4-0. The current roster includes several players fresh from stints with the Arizona Coyotes this season, including young guns Jan Jenik and Victor Soderstrom.

Jenik’s Unique Run
Roadrunners rookie forward Jan Jenik is on an impressive scoring streak, as it is split between the Tucson Roadrunners in the AHL and the Arizona Coyotes in the NHL. Jenik has a point in seven of his last eight professional games (six AHL, two NHL) and a six-game active point streak. Jenik will certainly be a factor in Tuesday’s game with San Jose, as he recorded a goal and an assist in a game against the Barracuda on February 8.

The Importance Of Ivan
The goaltending performance of Ivan Prosvetov will be key in shutting down San Jose on Tuesday. Prosvetov opened the season against the Barracuda, starting in net for both games February 7 and 8. Prosvetov held the Barracuda to a combined four goals, picking up the win in each game as well. Prosvetov made a season-high 47 saves in his last game at the FivePoint Arena in Irvine, California, in a 9-2 win over the San Diego Gulls on May 1.

Did You Know?
When it comes to playoff hockey, the Roadrunners and Barracuda aren’t exactly strangers. Tucson and San Jose met in the opening round of the 2018 Calder Cup Playoffs, with the Roadrunners winning the best-of-five series in four games. Tucson outscored San Jose 13-8, and goaltender Adin Hill shut out the Barracuda in each of the last two games to advance to the Pacific Division Finals. Defensemen Dysin Mayo and Kyle Capobianco both suited up for the series.

Around The Pacific Division
As the 2021 AHL Pacific Division Playoffs kick off, four teams will be in action in Irvine, California early this week. The Tucson Roadrunners will be taking on the San Jose Barracuda, as the Ontario Reign clash with the Colorado Eagles. The winner of each game will meet the next day, with the last team standing out of the four traveling to Las Vegas to face the top-seeded Henderson Silver Knights in a best-of-three series. The San Diego Gulls and Bakersfield Condors will be playing on the other side of the bracket in Bakersfield.