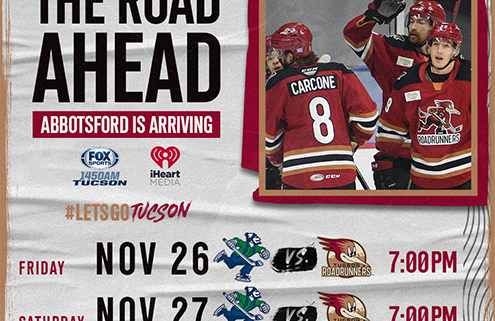 The Roadrunners will head home and host the Abbotsford Canucks for the first time in franchise history for a pair of games Friday and Saturday night at the Tucson Arena. Both games will face-off at 7:00 p.m. MST. The Canucks are currently 4-4-2-1, with a +1 goal differential. They’ll enter the series on a two-game point streak (1-0-0-1). Tucson will look to start the all-time series with Abbotsford off with a pair of wins, before the Roadrunners travel to Abbotsford December 22 and 23. The special food item for the weekend with the Canucks will be Arizona-Style Poutine.

The Roadrunners fan-favorite Kachina jerseys, which debuted in 2019, will be back at the Tucson Arena for the pair of games this weekend, when the Roadrunners host the Abbotsford Canucks for the first time in franchise history. The weekend will be full of festivities, with a cowbell giveaway to the first 1,000 fans Friday night. Fans can purchase a discounted ticket which includes a free Kachina hat for either game by clicking HERE.

The Roadrunners will be hosting a Toy Drive for Diamond Children’s Medical Center at each of their games this weekend. As a thanks for each toy donated, fans get receive a free ticket voucher for Tucson’s December 14 or 15 games against the Henderson Silver Knights next month.

The Roadrunners are teaming with their fans, corporate partners and the Boys and Girls Clubs of Tucson to provide Thanksgiving Dinners to local families in Southern Arizona. All families will receive items to prepare Thanksgiving Dinners, tickets to the Roadrunners game on Friday, November 26 and four Roadrunners Kachina hats. Roadrunners fans who donate $100 towards the team’s holiday meal efforts will receive a Kachina puck signed by goaltender Ivan Prosvetov and be recognized at the game on Friday, November 26. Fans can get involved by clicking HERE.

Weekend With The Wild

The Roadrunners traveled to Des Moines to take on the Iowa Wild last weekend, handing the Wild their first regulation loss at home of the season on Sunday. Iowa entered the series with the best home power-play in the AHL, and atop the AHL Central Division. Tucson held them to 1/9 on the man advantage. The Roadrunners won on Sunday by a score of 2-1, with goals by Matias Maccelli and Terry Broadhurst.

The Roadrunners have a talented defensive unit full of both youth and experience. Out of the seven defensemen currently on the Tucson roster, the average age is 21.9 and four of the seven were born in the year 2000 or later. Vladislav Kolyachonok and Vladislav Provelnev both have prior professional experience in the KHL, and Victor Soderstrom and JJ Moser have played professionally in Sweden and Switzerland, respectively. The remaining three: Cam Crotty, Ty Emberson, and Cole Hults, each played three years of NCAA Hockey before making their way to the Roadrunners.

The Roadrunners had some fresh faces contributing to their 2-1 victory Sunday afternoon against the Iowa Wild in Des Moines. Forward Terry Broadhurst netted the eventual game-winning score, his first goal as a Roadrunner.  Joining the Roadrunners and making his debut this weekend was forward Lewis Zerter-Gossage. A week removed from a six-point night with the Maine Mariners of the ECHL, the 26-year-old played in both games against Iowa and recorded an assist on Broadhurst’s goal Sunday afternoon for his first point with Tucson.

Also debuting with the Roadrunners this weekend was goaltender Zane McIntyre. McIntyre stopped 31 shots in the Roadrunners 2-1 win on Sunday, earning him first star of the game honors. The 29-year-old was originally drafted by the Boston Bruins and was a member of the Providence Bruins when current Roadrunners General Manager John Ferguson was GM of the AHL’s Bruins. McIntyre has reached double-digit wins in all six of his previous AHL seasons, including three 20-win seasons, and has finished in the top five in wins three of the last five years.

The Roadrunners are returning home this weekend and will look to repeat the offensive performance of their last home stand. Tucson put up 11 goals in two games against the Ontario Reign at the Tucson Arena November 12 and 13. The Roadrunners handed the Reign their first regulation loss of the season that Friday night, with a thrilling 8-4 victory backed by a Matias Maccelli hat trick. In six games at home this season, the Roadrunners have had seven periods with multiple goals scored, including three periods of three goals scored. This includes the three-straight power-play scores in the previously mentioned 8-4 win over Ontario. Entering the series with Abbotsford, Tucson is averaging four goals per-game at home this season.

The Roadrunners will be looking to make it four-straight weekends at home to open the season where a Tucson player records a hat trick, dating back to the team’s Home Opener against Texas on October 23. That weekend it was Ben McCartney with the feat, followed by Hudson Fasching the following weekend, then Matias Maccelli two weeks later. To help restock the hat supply of fans, the Roadrunners are offering a discounted ticket and a Roadrunners Kachina hat for $20 by clicking the link HERE.