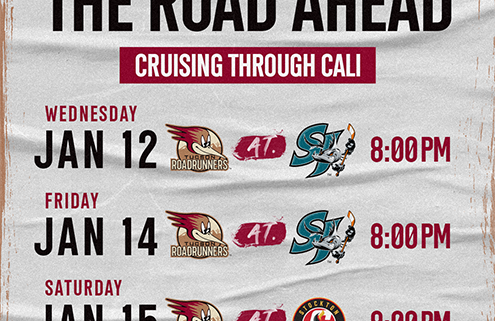 The Roadrunners will be back on The CW Tucson in Southern Arizona for their first-ever televised road game on January 15, when Tucson visits the first-place Stockton Heat at 8 p.m. MST.

CW Tucson can be found on the following stations:

Roadrunners fans can watch Saturday’s game at Dave & Buster’s at 1390 E. Tucson Marketplace BLVD. The party starts at 7:30 p.m. and will feature food and beverage discounts, prizes and giveaways and exclusive point offers for Roadrunners fans.

Starting The Year At Home

The Roadrunners opened the 2022 schedule with a four-game home stand at the Tucson Arena, playing a pair of games each against the Stockton Heat and Colorado Eagles. The Roadrunners opened the calendar year with a tight 2-1 win over the first-place Heat and battled back to force a shootout in the series opener with the Eagles. Tucson fought hard in Sunday’s home stand finale despite missing four key forwards in Ryan McGregor, Terry Broadhurst, Ben McCartney, and Travis Barron. The Roadrunners will be back at home to close out the month of January with a three-game set against the Bakersfield Condors beginning on January 26. The series with the Edmonton Oilers AHL affiliate includes an El Lazo de Tucson night on Friday, January 28, and Star Wars Night the following evening on January 29. More information on the Roadrunners next series at the Tucson Arena and tickets to all the action can be found HERE.

Spending A While On The West Coast

For the first road trip of 2022, the Roadrunners will be traveling to the state of California for a six-game, four-team stretch beginning this Wednesday, January 12, at the SAP Center against the San Jose Barracuda. Tucson will take on the Sharks AHL affiliate in their shared arena Wednesday and Friday night, before heading to Stockton Saturday for a rematch with the first-place Heat. The team will have three days off before taking on the Bakersfield Condors for the first time since March 1, 2020 on January 19, before wrapping up the trip with a pair against the Ontario Reign January 22 and 23. All the games will be broadcast live on AHLtv, as well as on the radio on FOX Sports 1450 AM and the iHeartRadio App.

The Storyline of the Roadrunners last five games has been the ability of their special-teams units. Tucson’s penalty kill went a perfect 16-for-16 from December 18 to the second period of Sunday’s series finale with the Colorado Eagles. On the other side of the ice, the Roadrunners power-play unit tallied 6 goals over that span, including two goals apiece for Jan Jenik and Mike Carcone while on the man advantage.

Several Streaks To Shout Out

The Roadrunners enter the six-game road trip with three forwards on a point streak of three games: Matias Maccelli, Boko Imama, and Mike Carcone. The trio have combined for 11 points over each of their last three appearances, with Maccelli and Carcone first and second on the team for total scoring. Imama, known for his physical play leading the team in penalty minutes per-game (at least 6 gp), has flexed his scoring ability with his longest scoring streak since March 2021 with the Ontario Reign.

The Roadrunners had a total of five fights over the four-game home between the Heat and Eagles, with at least one bout in each contest. 21-year-old Ben McCartney opened the card with his second fight of the season, against Stockton’s Glenn Gawdin. Hudson Elynuik followed him up the next evening with the match against the Heat’s Eetu Tuulola. Over the weekend, Colorado’s Keaton Middleton had a pair of fights beginning on Saturday night with Tucson’s Cedric Lacroix. The second match of Saturday’s contest was between Tucson defenseman Chaz Reddekopp and Eagles defenseman Andreas Englund. Middleton rounded out the weekend with his second bout, a rematch of a December 4 matchup with Tucson’s Boko Imama on January 9, Imama’s fifth time dropping the gloves this season.

Returning To The Roadrunners

Roadrunners General Manager John Ferguson announced on January 4 that the team had acquired defenseman Doyle Somerby from the Iowa Wild in exchange for future considerations. Somerby appeared in 24 games with Tucson during the 2020-2021 season and recorded seven points after spending three seasons with the Cleveland Monsters. Also returning to the Roadrunners roster last weekend for the first time since December 18 was rookie forward Matias Maccelli. In the weekend series with the Colorado Eagles, the 21-year-old recorded a point in each of the contests, extending his active point streak to three games and maintaining his point per-game average through 23 showings this season.

A Deluge Of Debuts

Tucson saw four different skaters make their Roadrunners debuts at the Tucson Arena over the last week, beginning with forwards Logan Nelson and Stephen Baylis on January 4, both from the ECHL’s Rapid City Rush. Also from the ECHL was defenseman Matt Foley, who made his Tucson debut the following night. Rounding out the list was newly-acquired forward Cedric Lacroix on Saturday night against Colorado, where the 27-year-old got into a fight in the first period to introduce himself to the Roadrunners fans. Nelson’s debut was especially significant, as it marked the 28-year-old’s 400th professional game and overall AHL debut. Through 25 games this season, the Roadrunners have dressed 20 forwards, 13 defenseman, and three goaltenders.

Roadrunners forward Hudson Fasching has been a model of consistency so far this season, averaging nearly a point per-game in 16 appearances this season. The 26-year-old and Roadrunners veteran has only gone two consecutive games without a point this season once, back on November 5 and 6 on the road against Henderson. Fasching is second on the Roadrunners for assists (11), and third on the roster for total points (15). The Milwaukee, Wisconsin native has appeared in seven games with the Arizona Coyotes, the fourth-most of all 2021-2022 Roadrunners.