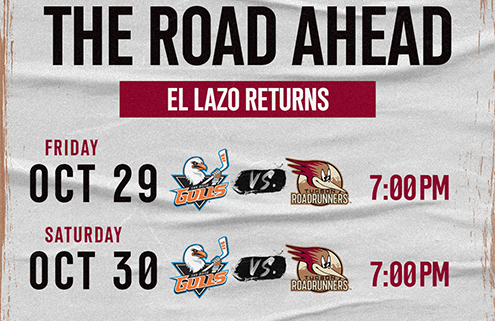 The Roadrunners will be home for one more weekend at the Tucson Arena for a pair of games with the San Diego Gulls Friday and Saturday. The Roadrunners will be reintroducing their El Lazo de Tucson identity, which debuted last year as an homage to Tucson’s history and culture. Tickets for this weekend and beyond are on sale and can be found HERE.

Along with the El Lazo de Tucson identity making a return this weekend, Friday’s game marks the first game of the season to offer Friday Night Party Packs. Party Packs include two premium tickets and a $20 food voucher by clicking HERE. In addition to Friday’s festive ticket offer, Saturday is the first Family Fun Night of the season. Families can save $40 on four tickets and a $20 concession voucher by clicking HERE.

The first 750 kids age 12 or under at Saturday’s game against San Diego will receive a Roadrunners-branded Halloween trick-or-treat bag, with trick-or-treating set to take place after the game. Fans are encouraged to dress up in their best Halloween costumes for the game, and Roadrunners mascot Dusty is sure to join in on the fun as well.

A Series Tie With Texas

The Roadrunners returned to their home ice for the first time this season last weekend for a pair of games with the Texas Stars. Tucson took the first game 4-0 but fell 6-2 the second night to split the series at one win apiece. Both teams sit at 2-2 with an even nine goals scored, and nine goals allowed through two weeks of AHL regular season action.

The Roadrunners will host their I-8 Border rival San Diego Gulls for a pair of games at the Tucson Arena. Tucson will look to defend the I-8 Border Trophy for a fifth-straight season, after the teams split the season series last year, each putting up a 4-4 record in eight games played between these squads. The battle of the birds will be back starting Friday night at 7:00 p.m. MST, with coverage beginning at 6:45 p.m.

Two rookie Roadrunners scored their first North American professional goals last weekend against the Texas Stars. The Maltby, England native Liam Kirk was the first to accomplish the feat, in the final minute of Saturday night’s 4-0 win. The Swiss defenseman JJ Moser followed it up with his first goal on North American ice the next day. The two rookies are only separated in age by five months and were signed to entry-level deals by the Arizona Coyotes less than a month apart during this past offseason.

Three of the four goals in Saturday’s shutout victory over the Texas Stars were scored by Roadrunners forward Ben McCartney. The 20-year-old made his season debut Saturday against the Stars, after making his professional debut against the Stars last May in Texas. McCartney started off with a power-play goal, followed by an even-strength goal, and capped it off with an empty-netter in the third period to complete the hat trick.

Roadrunners goaltender Ivan Prosvetov started in net for both games last weekend against the Texas Stars. The 22-year-old earned his second-straight shutout to start the Saturday night, after he denied all 19 shots brought on by the Stars as Tucson cruised to a 4-0 victory. Prosvetov opened the season the previous weekend in Stockton when he stopped 29 shots in a 1-0 overtime win against the Heat.

Prior to Saturday’s Home Opener at the Tucson Arena, Roadrunners players and Head Coach Jay Varady walked the red carpet as fans welcomed the team back to the Tucson ice. Even getting on the action was Roadrunners mascot Dusty, with his signature red suit jacket. The cars were provided by the Green Valley Corvette Club.