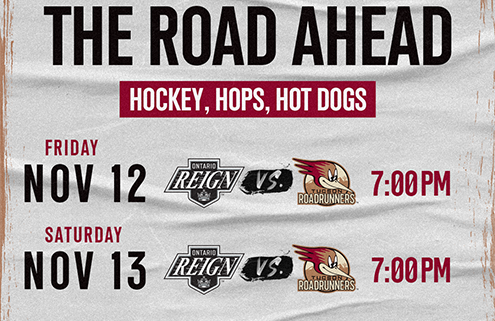 The Roadrunners return home to host the Ontario Reign for two games at the Tucson Arena Friday and Saturday night. The Reign come into town for the first time this season, and current Roadrunners Boko Imama and Cole Hults will get to face their former team for the first time. Both games begin at 7:00 p.m. MST, and tickets can be purchased HERE.

Military Appreciation Night is Saturday, November 13 at the Tucson Arena, when the Roadrunners take on the Ontario Reign. The team will debut their new Military Kachina Jerseys, one of seven sweaters the team will wear this season, featuring a digital camouflage pattern alongside the iconic Kachina logo and design. After the game, the Roadrunners will be auctioning off the player’s jerseys, with proceeds going to Vet Tix.

Prior to Saturday’s Military Appreciation Night, the Roadrunners will also be hosting a Hockey and Hops event. Over a dozen local breweries will be in attendance for the sampling event, and fans can receive a commemorative Roadrunners-branded shot glass. The event will be at 4 p.m. MST before a 7 p.m. face-off. In the words of Roadrunners President Bob Hoffman, “It’s easily one of the best dates of the year, one that we always circle on the calendar.” More information about Hockey and Hops can be found HERE.

Tucson Roadrunners In-Game Host Beef Vegan will have “Beef’s Cheap Seats” available at the Roadrunners next home game, Friday November 12. Fans can get 50-percent off tickets by listening for the code word on 102.1 KFMA, Tucson’s Rock Station, and clicking HERE to get in on the deal. Beef’s Cheap Seats will be available at select games all throughout the season, so stay tuned.

What Happens In Vegas…

The Roadrunners clashed with the Henderson Silver Knights last weekend with a pair of games at the Orleans Arena in Las Vegas. Second-year Roadrunners Ty Emberson and Mike Carcone each picked up their first goals of the season in Saturday’s 3-2 overtime loss. Tucson performed well in even-strength situations but were held back by giving Henderson 10 chances on the power-play. The Roadrunners drew a season-high eight power-plays on Saturday, however, doubling the number of chances compared to Henderson. They’ll look to continue that trend when Henderson comes to the Old Pueblo December 14 and 15.

Arizona Coyotes General Manager Bill Armstrong announced Sunday that the Coyotes have assigned forward Ben McCartney and defenseman Victor Soderstrom to the Tucson Roadrunners. McCartney was recalled by the Coyotes on Nov. 4 and made his NHL debut the next day in Anaheim. The 20-year-old forward has registered 4-1-5 and is +2 with two penalty minutes (PIM) in four games with the Roadrunners this season and returns tied for the team lead in goals. Soderstrom has played in nine games with the Coyotes this season and has totaled 1-1-2 in 13 career games with Arizona. In 32 games with Tucson last season, Soderstrom had recorded 2-8-10 and 8 PIM. He was drafted by the Coyotes in the first round (11th overall) in the 2019 NHL Entry Draft.

A Pair Of NHL Debuts

Forward Ben McCartney and defenseman Cam Dineen made their NHL debuts alongside each other Friday night in Anaheim, becoming the fourth and fifth players from Tucson’s Opening Night roster to play for the Arizona Coyotes this season. McCartney and Dineen also become the 40th and 41st players in franchise history to suit up for both the Coyotes and Roadrunners. They joined defender Dysin Mayo as Roadrunners to make their NHL debuts this season.

Arizona Coyotes defenseman Dysin Mayo has been quietly making an impact with the Coyotes in his first month of NHL action. Mayo has played on the top pair in four of the last five games and has averaged over 22 minutes of ice time in that span. The 25-year-old set a new high for shifts (27) and earned a +3 rating in the Coyotes 5-4 win over the Seattle Kraken Saturday night in Glendale.

Roadrunners Thank Military and Veterans This Week
Scroll to top